January, for me, is normally a month to knit hats. I think I fell into this knitting habit years ago when we used to take a month-long, January ski vacation. It was easiest to pack and to knit small projects when away from home for the month.

The fun, when the vacation was over, was giving away a big box of hats. One year I sent the box to my Grand kids in Hearst. Their Mom told me it was like Christmas all over again . One year I gave the box to the 'Sally Ann' and shortly after saw a young girl walking home from school, wearing one of my hats. That made my day. But, since moving here to ski country, I leave the box on a shelf in the 'mud' room and offer hats to all our skiing visitors.

2010, however is different. I am committed to knitting only Elizabeth Zimmermann for the year. Mind you, EZ does have hat patterns and probably, eventually, I will do a few. But hats weren't my January EZ choice. First choice of course was my interpretation of the Waterloo County Fairisle (which by the way now has 72 rows done.) done EZ style.

Next up, in February, is the Meaford Knitting Olympics and I'll be knitting another EZ pattern. The Green Sweater. All of which means, no hats.

But since this is what is currently in the box, 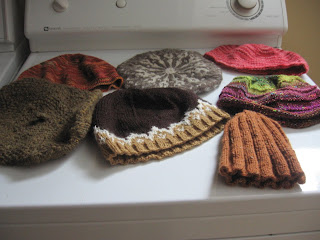 perhaps, my stockpile is sufficient. It doesn't hurt to be different once in a while.

Have a great snowy, knitting weekend everyone.
Posted by Brendaknits at 11:28 AM

Uh-huh, by the looks of that hat stash, incoming heads will be handsomely covered!

I've reorganized how I keep track of blogs and it seems its preventing me from keeping track of blogs...I'm just seeing this now - days later - those colours are beautiful! What a gorgeous array! Is it the light in that room? Could we see "Waterloo" in that room?

Now on to the hats - again - love the variety! How fun when you can knit what you want rather than what will suit a particular person!