I should have taken a picture of Pat's latest knitted toy today, but I neglected to do so. Perhaps I was too caught up in her story. She told me of taking her knitted toys to a local women's shelter before Christmas. In the lobby there was a small boy being watched over by a policeman. Pat reached into her bag and gave the boy a knitted toy. She said he looked at the toy, then at her. He turned to the policeman and said "She must be an angel". Warms the heart, doesn't it?

Doreen will be warm enough when she finishes this large scarf. 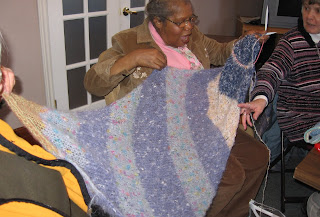 She seems to be quite surprised by it growing size. This is a great stash buster, Doreen. 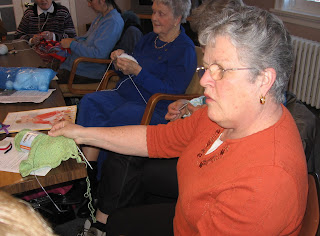 A simple cardigan with a great edging that she thinks she will get out of her one ball of green yarn. Another ball gone, Gail. 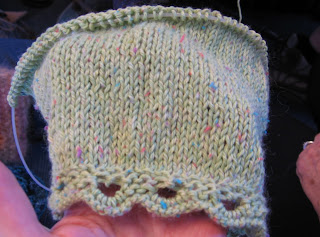 Ingrid is knitting with lots of concentration. 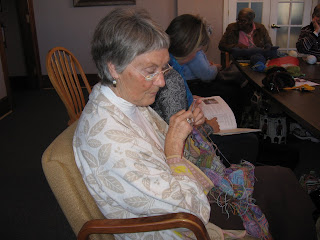 No wonder. Look at what she's doing. 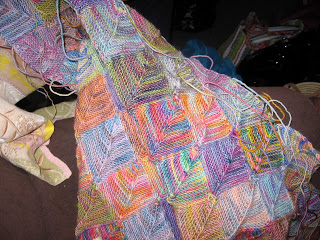 She calls it her dream garment that is giving her nightmares.

Several of the knitters, me included, went straight from knitting to Meaford Hall. The film club there was screening Julie and Julia. It was not the first time I had seen the film, but it is such a fun movie, it was great to see it again. One has to make do until Survivor starts.
Posted by Brendaknits at 7:53 PM