The New Year is now official. The first knit group meet-up of 2010. Let the year begin.

Wilma wasn't long in the room before she 'stole' Sharon's holiday weaving. 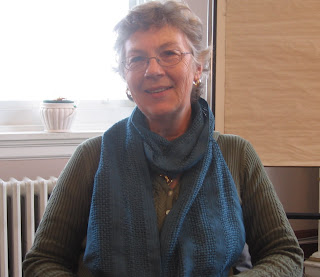 Teal is Wilma's colour, so of course she had to 'steal' the scarf for a try-on.

Think what a set of double pointed needles could have done for you here, Doreen. Doreen is a breast cancer survivor and the disease has left her with an arm that swells and feels the cold. These very long mitts should keep the arm warm and still let her knit.

And to show off, Doreen brought her hat with the perfect, crocheted flower. Before Christmas, Ingrid had helped Doreen crochet a flower to decorate her hat. But Ingrid wasn't pleased with Doreen's rose-making efforts and suggested Doreen try again. Here is the re-do. 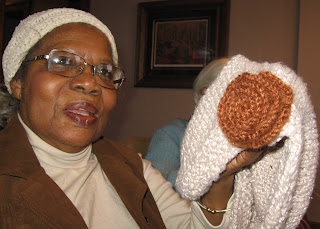 Sharon knit a pair of felted slippers for hubby. 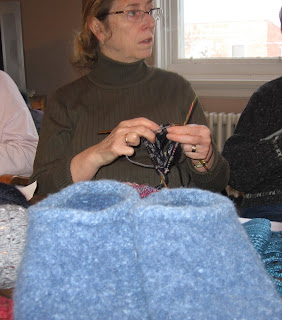 Joanne, our master mitten maker knit another pair of mittens. 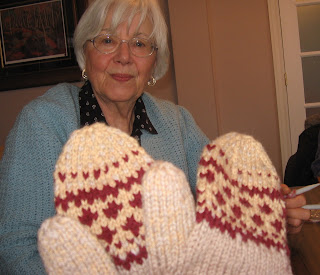 She says she gave away five pairs of her glorious mittens over the holidays. Today, reminiscing, Joanne told us that the very first thing she ever knit was a pair of mitts when she was about ten years old. And here she is, years later, still knitting mittens. I'm not sure if she thought that a good thing or not.

Today's main conversation revolved around spousal Christmas gifts that missed the mark, and the universal - well, universal around our table at the Meaford library - dislike of housework. Funny what can make an entire room of knitters howl with laughter. Let the year begin, indeed!
Posted by Brendaknits at 7:41 PM