I am off to a great start. The 'swatch cap' is done- well at least up to the top section where decreases would make gauge hard to measure. 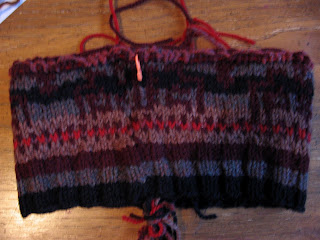 Gauge, or as EZ says, GAUGE has been measured.

Does anyone else have trouble measuring gauge? The cloth tape measure gave one number. But the little aluminum ruler gave another. Close to the ribbing, gauge is one thing. Close to the top it was another.

Elizabeth said to measure over three inches and I guess, since it is her year, that's what I should have done. But if three is good, four is better. Right? And if four is better, six is best. Right?

The risk of a boring, blog post doesn't permit me to list all the different gauge readings I got. Between the top and the bottom. Between the cloth tape and the little aluminum ruler. Between the three inch reading and the four. Or the six. So in the end. I said. What the heck? The reading I like best is ...and went with that. Perhaps not exactly what Elizabeth meant when she said "Don't even be 1/4 stitch off."

But given I have a 28 stitch chart to deal with and need to divide those 28 stitches evenly into the circumference of my sweater, I figured it was good enough. And given Elizabeth's primary goal of encouraging knitters to be thinking knitters, I think 'good enough is good enough'.

However, despite now being pleased with the stitch gauge, I think I might have to rip out what I have done so far. 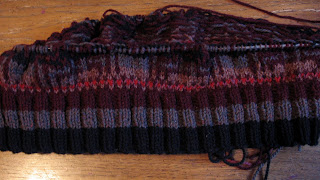 Last night, a niggling, little, knitters thought occurred to me. Row gauge. Oh yea. The other half of the equation.

In a normal fairlisle-patterned sweater, with a three or four row fairisle pattern, it maybe doesn't matter much. But I have a 32 row high pattern. If I want (and I do) the completed motif to end just below the ribbing for the centre front neck, I need to know how many rows it will take to get there for the length of sweater I'm knitting. The picture in the pattern book shows the sweater knit with that perfectly placed motif. But their sweater is 25 inches long. Mine, is being done EZ style. To fit me, not the designer's idea of what I should wear. Mine will not be 25 inches long. Therefore .... I don't even need to finish that sentence.

As my sister-in-law would ask - "Having fun yet?"
Posted by Brendaknits at 9:53 AM

My understanding about fabric tape measures is that eventually they stretch and so can be less accurate. When I'm trying to be a "good and careful" knitter I use the little "window" in my needle gauge because it blocks out all distraction except what I'm measuring and the straight edge along the bottom is handy to ensure I'm only looking at one row as I count. 'Problem is I've yet to get a needle gauge with a 4" window! Details! Details!

go with the metal gauge - I agree with Sel & Poivre - fabric ones can stretch.
Have you thought about flipping the chart and knitting this from the top down? It's a great way to ensure perfect fit...

As the Yarn Harlot said "Gauge is a big fat stinking liar." Or something to that effect.

Have you considered what will happen when you wash your hat/swatch? What about the weight of the sweater pulling it down?

It's a crap shoot, no matter what you do. I try to aim in the general direction and hope for the best.

I always tend to blow off row gauge - probably because I can never get it! I figure if my stitches are right, then I can always adjust for length.