The Power Of Children

Since early Monday morning, when the hardware store opened, Fred has been outside playing I mean working, in his dog house I mean, shed. 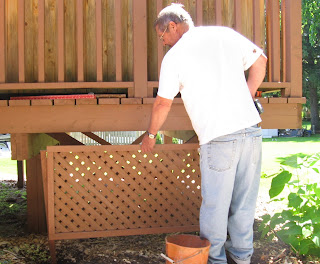 Peter was up last Sunday for Fathers' Day. While touring the garden, our artist son suggested that some 'picture frames' made from lattice work with ferns planted in front of them would look great 'planted' in a few spots around the outside of the deck to hide it's underbelly. 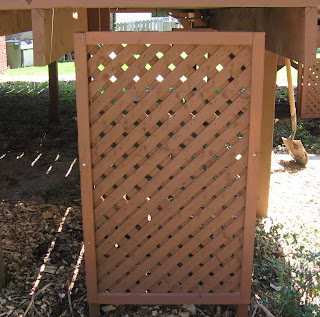 Since we have a second outdoor sitting area at ground level in front of our raised deck, we had been trying to come up with an idea for something that would distract from the underside of the deck while enjoying that lower patio. Peter's idea was a very creative solution.

But I am glad it was Peter that made the suggestion, as the frames are done and being stained as I type. Five days from suggestion to gestation!! I'm sure you might know of what I speak when I say that my suggestions sometimes languish. Peter's are done, pronto.

This afternoon, it has been suggested that we go plant shopping. Ahhh - the power of children. Peter, when can you come again?
Posted by Brendaknits at 11:56 AM

Looking good!Its easy to be the idea guy, but I feel sorry for the worker!!

Now that calls for what we refer to as a "viewing"! Whenever my husband does something around house or cottage, once its done or there's significant progress, I get a chair (and often a beverage) and then I go and sit and look at and gush about the newly finished item. I am often fully ignored while doing this but interestingly, when I fail to do it, I hear about it!