Knitting Friends In Every Port

You  might remember, a few years back, I met Ruby.  Ruby of the Napa Wool and Tool store here in Hearst.  We have maintained a knitting friendship since then and every year when in Hearst, we get together to knit, eat, chat and just catch up.

Here is Ruby in my gazebo at the lake. What was supposed to be a quiet enjoyable afternoon of knitting turned out to be a noisy, distracted time.  New tenants chose our knitting aftrenoon to move into the lot beside us. All afternoon, as we tried to knit and chat,  several old men, reliving their glory days came and went on ATVs loaded with stuff.  How much stuff can one camping family have. 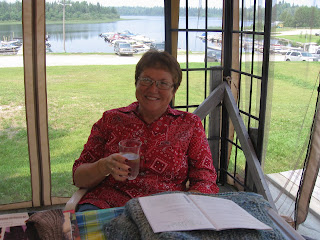 In the end, we laughed  - and that is just water she has there - and decided it just meant we had to schedule a second afternoon.  Ruby showed off her bag from the 2009 knitting crusie. 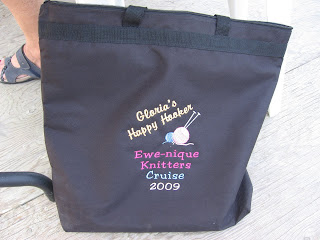 The Tunic Is A Hit

Abi has tried on the Tunic and it meets with her approval.  It fits and she likes it - a lot.  At least the wearing of it everyday since would seem to suggest that.

Improving everyday on this library computer, I can now bring you a link to the book and pattern for Abi tunic. No slouch I. 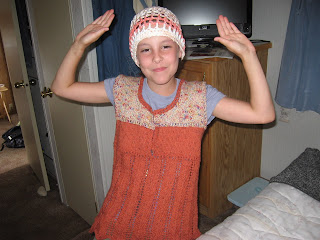 Here, she is also wearing a crocheted skull cap I made for her.  A variation of the Butterfly Hat.  Especially designed  to give it a more open look as requested.  Nine year old girls are quite precise in their likes and dislikes.    And it gives this Grandma great pleasure to knit to those specific requests.

Thanks toElizaeth Zimmermann and Dana Gibbons

I was also going to include Pierre Elliott Trudeu, father of Canadian Bilingualism in my title, because last week, the librarian told me I had innocently selected the only French computer of the six here at the library.  I was praising Pierre for his bilingual initiatives - I mean why else would there be five English keyboards at the library in a French community,  until I sat down to type.  I have not been able to find an English keyboard yet. So Pierre - your praise will have to wait until I can find a keyboard with apostrophes and question marks.  In the mentime, excuse the punctuation and spelling errors once agian.

But Dana and Elizabeth - Thanks.  Abi spotted, liked and asked for Danas tunic pattern from Teens and Tweens. I happened to have two balls of Cotton Tweed in my stash  - the pattern calls for three - but with some coordinating variegated, it would work.  This pattern is wonderful.  Extrememly well written.  never once did I go HUH!  Well done, Dana.

I have met Dana a couple of times and worked with her for the day this spring at the Knitters Frolic.  But this is the first time I have knit one of her patterns.  I will seek out more of them.  The tunic has a great feather and fan pattern on the lower half.  A simple, easily memorized pattern that would work wonderfully for an adult skirt.  In the tunic pattern it reaches the bodice then is separated from the plain stockinet of the bodice by a couple of eyelet rows.  This eyelet also trims the neck and armholes.

Thanking EZ might give you pause - although since most of you are knitters, probably not.  But in this case, although Dana said the tunic would take three balls of yarn, I got so far along with just one ball, that I convinced Abi that we didnt need to switch to the variegted.   I was certain I would have enough of teh plain orange.  Of course I ran out.

That is when  I chanelled Elizabeth to determine what she might do.  Rather than rip back to the beginning of the bodice and knit it entirely in variegated,  I simply began the variegated at the arnholes.  I did try to edge both the neck and armholes in the plain orange  to tie in with the lower portion.  And got close.  A rip and re-knit later, here it is blocking.  Abi has yet to see it or try it on.  So fingers crossed. 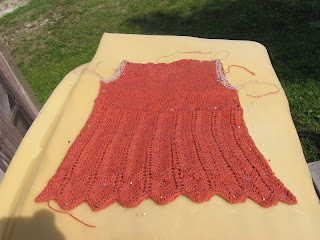 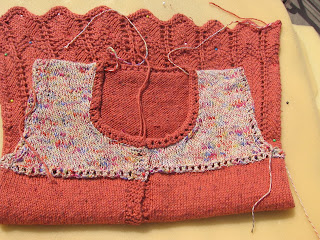 From The Library In Hearst

Marvellous that all libraries have computers for public use.  Too bad this keyboard isnt in English.  If I want to include an apostrophe it will look like this --è.    Or a question mark will look like this -- É  Spell check doesnèt  !! work either - well it works but it shows every word I type as being misspelled.  They are not French words afterall.

Now I will attempt to give you photos. Strange computer, stange language, strange system - well strange to me that is. I might bomb out here.

A bit of help from the French speaking librabian  and here you are.  First you see Featherweight blocking Hearst style.  Soaked then pinned to a scrap piece of foam and drying out doors in the sun.  No room in the trailer afterall. 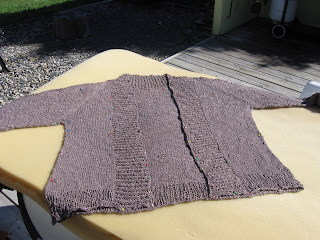 And now me in my habitual  new-sweater pose.  Faceless with  hands up - in happiness not arrest. 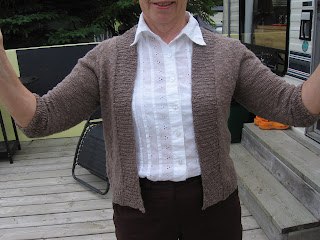 And my attempt at the thinkers pose. 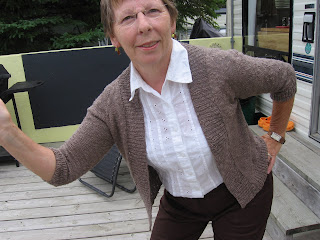 Featherweight is a lovely sweater.  Very light - just enough warmth and coverage for a summers day.  I used less than two sekins of Americo Cotton Flammè - hey this French keyboard comes in handy.  Quite a bit less I think but until I get home to my yarn scale, I wont know for sure.

Details will follow at summers end when I am home and have time to put details on ravelry.
Posted by Brendaknits at 11:48 AM 8 comments:

It has been a fun, eleven (not that I'm counting) days with two of the Grand Kids.  Activities ranged from  Canada Day 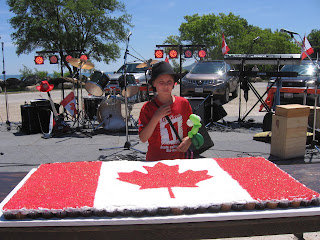 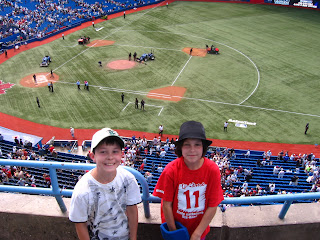 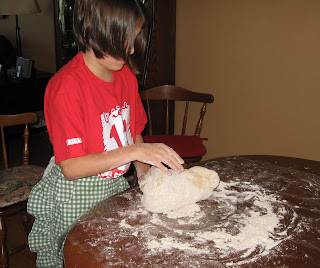 What there has not been is knitting.  Unless you count the few partial rows I've accomplished each night before falling asleep in my chair.

Tomorrow we head for the far north via the Chi Cheemaun.  Another new experience for the kids.  There is little that beats witnessing a child experience something for the first time.  Like walking the hall of the Rogers Centre to exclamations of  "This place is HUGE!"

The next six weeks will be Internet -free for me.  Occasionally, I will borrow a computer for a post or two.  But mostly, it will be outdoor activities until I'm home again.

So - have a great summer everyone.
Posted by Brendaknits at 8:05 PM 8 comments: