Let me introduce you to 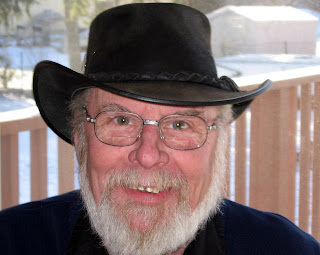 our buddy, Paul. Or as his wife and any who have managed to master the complicated cadence call him, VENNing. (Say it loudly and quickly. Bark it more than speak it and place great emphasis on the first syllable.)

Long before you see Paul, you know he has arrived. His personality fills the room; he has a booming voice, a loud, infectious laugh and a great, easy grin to greet each friend. His Attention Deficit Disorder high energy make him a man hard to keep up with. He is always on the go, volunteering countless hours to his favourite organizations.

Would he be easy to live with? Only his wife knows for sure, but I think not. (One of his many God-given gifts weighs heavily on talk but is light on listening.) Would he be easy to work with? I have it on good authority that some days, he' not.

But one of the gifts Paul brings to all that know him is that he is the keeper of all things historical of interest to his family and friends. Ask him for dart team scores, dating back to 1902 1996 and chances are he has them. Ask him to show you his father's war discharge papers or Avvro Arrow models from the plant where his Father worked and he has them.

To many, Paul might be called 'a character'. As readers know, characters are amongst my favourite people. Without this introduction, I felt you wouldn't understand what happened at our house, Saturday morning. To me, it was not unusual - I just smiled. But if you didn't know the man, you might think it odd. The phone rang ---

Paul: "I've got a knitting pattern for ya'."

Me: (Delighted) "Ooh, you've been reading the blog?"

Me: (Deflated) "Oh. Where did you get the pattern?"

Paul: "I've been cleaning out Mother's stuff ( Mother died in the late 90s.) and came across this pattern. Dated 1949. I thought you'd like it for your 'blogn'such'. It's for Bunny Slippers."

Me: "Well, your wife knits, wouldn't she like it?

Me: "But Paul, you've told me that she does knit."

Paul: "So. I thought you'd like it for your 'blogn'such'. Wouldn't it be something to have a 1949 knitting pattern on your blog?"

Oooh. I 'got' it. His wife does knit, but she doesn't have a blog. She could make slippers, but not tell the knitting world about his Mother's pattern. So, Paul thought of me.

The envelope is hand typed. It cost four cents to mail.

The pattern is hand-typed and has no photo. Remember them? 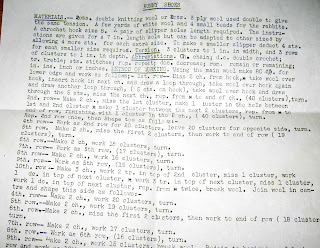 I am sure his Mother saw the pattern advertised in a newspaper and sent away for it. It is a piece of fibre history. And glad I am to have it, Paul.

Love it!! The best part is that it's a crochet pattern. I hope you are planning on making them. Would love to see them. That was so nice that Paul thought of you & wanted it shared with the world. Very special!

Oh boy, if you like characters I've a son to introduce to you. Your description of Paul reminded me a lot of my son Luke.

No one in my family reads my blog. But ever since showing my husband your post where Fred tried to "brighten up" his work jacket with bleach, its easy to get him to agree to peek at or listen to something on your "blog'nsuch". The punch line on this post left me roaring and him chuckling silently - when he's genuinely laughing he makes no sound save a little hissing from his throat. I nominated your blog for a Kreative Award yesterday citing your wit as a key reason you deserve the award - this post is such a clear demonstration of it - thanks for sharing VENNing with us!