Thursdays Are For Knit Group - and Tonight Passchendaele

Knit group normally meets in the upper room -a very sedate, grown-up room - at the library. But today when I arrived, I was told the knitters were in the basement. Maybe we were acting like kids last week, because look where they put us. 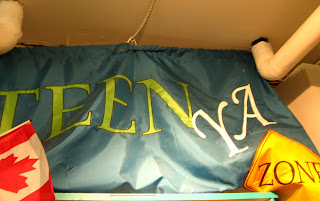 Knitters at the kids table. 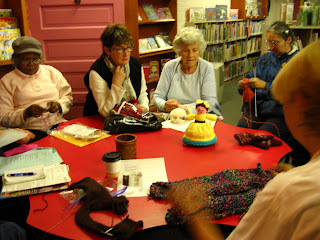 One nice thing about the kids zone, is we each had a different coloured chair.
Such fun. We might have had a little table and little chairs, but we were still BIG on knitting.

Pat, you are a machine. Two more knitted toys this week. 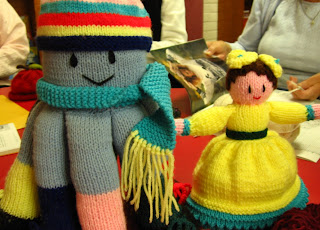 A great Octopus and a neat doll too.

Joanna is a' knittin' more of her great mittens. 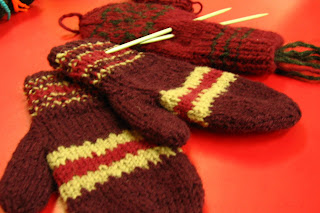 Doreen said the hospital called and asked for some knitting for their bazaar. She thought she had finished her bazaar knitting with the scarves she knit for the Church. The local bazaar committees must know what a great knitter you are, Doreen. Or maybe they know about your big heart. So, the hospital is getting hats. Scarves at the Church, hats at the hospital. A person is pretty well covered at bazaar time around here. 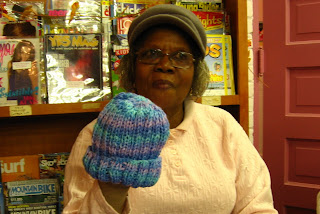 Eve made a lovely 'apple' hat. She is making a dozen of these for the 'Apple Dumpling Gang' We don't know who they are Eve, but they will sure be cute wearing these hats. 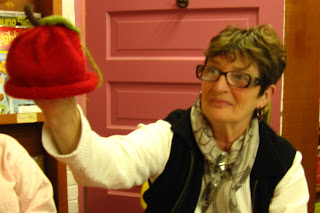 And Sandy, picked up a great knitters' tee shirt at the Creative Needlework Festival last week. 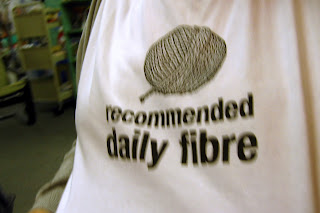 Another great day at knit group. And tonight, Fred and I are off to see Paul Gross in his movie Passchendaele. I think seeing Paul Gross in anything, might just be called 'eye candy'. And with our new and improved cable, I can time shift Survivor and watch it when we get home. Yippee! Knitting! Eye Candy! Survivor!. How great is that?
Posted by Brendaknits at 4:39 PM