Thursdays Are For Knit Group And Survivor Starts Tonight!

Today was all about Olympic knitting at Knit Group. Most of us brought our projects for all to see. It was decided it would be OK to cast on Friday night at 6:30pm Ontario time. The Opening Ceremonies start at 6:30pm Vancouver time, which would mean 9:30 our time. Too late for most of us. Tomorrow night, at 6:30PM, close your eyes for a moment and visualize nine, that's right, as of today, nine!!! Meaford knitters casting on for the Olympic Knitting challenge.

Doreen has her swatch done for her seed stitch vest. 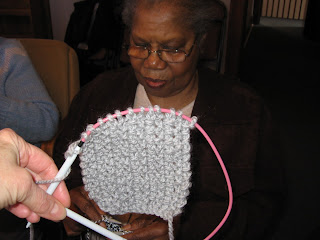 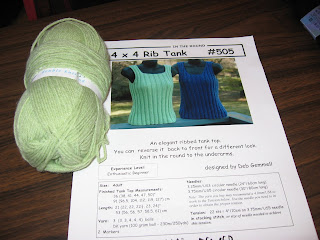 Gail is making a child's, top-down sweater with this yarn. 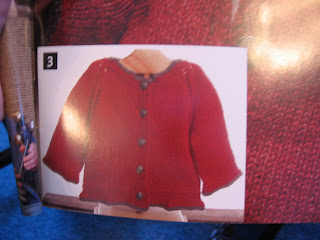 Nicki has chosen six projects - all small ones she says - as her challenge. Sadly no picture to hold her accountable. We just have to trust Nicki.

Even Lois has caught the excitement and is going for the gold. She will make a hat with this bright blue variegated. 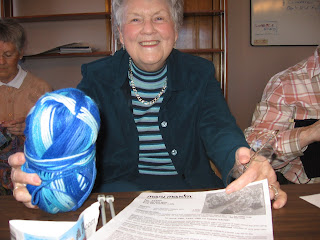 We did catch her cheating, though. She thought she was to cast on at knit group today. After being roundly boo-ed Honest knitter that she is, she ripped out what she had started. 6:30PM Friday, Lois. Not before. 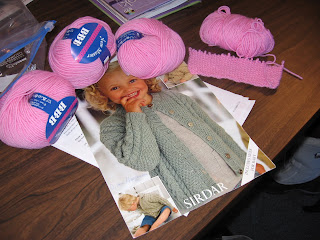 for the cabled, seed stitch sweater.

Sharon has practised yarn overs to perfection and is ready to cast on for Branching Out.

Gloria, new today to knit group, and good sport that she is, joined the Olympic team and says she will knit a doll.

Me, of course, I'm sticking to my 2010 designer. I will be knitting EZ's Green Sweater.

Even though the Olympics was the big topic, I couldn't leave off without telling you that ever since Lois joined the group sometime last year - July perhaps - she has been knitting this little baby sweater. 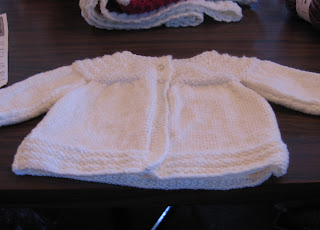 Unlike most of the Meaford group, she knits only when at knit group, never at home. Today, she finished the baby sweater. Way to go Lois. On to your Olympic knitting.

Gail, too, had exciting news today. Gail, trying to knit a ball a day in order to diminish her stash so she can buy more yarn at the 2010 KW Knitters Fair was dealt a big stash-busting set back at Christmas. 'Friends' gave her yarn. Proudly, today, she showed us this finished blanket. 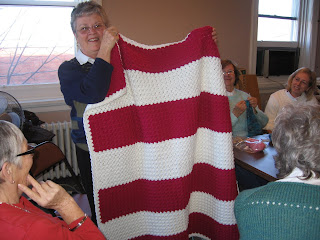 Perhaps I'm foolish. Perhaps one can never train too much. But I think I have everything under control for tomorrow's Olympic knitting. Tonight, I am knitting a sock for the first episode of Survivor.
Posted by Brendaknits at 7:21 PM

The sweater that Lois finished is the same pattern I had my mother knit (along with matching hat and booties) for my first born (a February baby) to come home from the hospital! Boy did that ever take me back when I scrolled down to it!

That stash busting beauty in red and white is also breathtaking...Gail looks pretty thrilled and deservedly so!

I was surprised to realize how late the start time for the opening ceremonies would be...I guess I imagined they would do it during the afternoon Vancouver time. I'm going to think today about adopting the Meaford start time for my own Olympic knitting.

I'm thrilled at the late (to Ontario) start time of the Opening Ceremonies - we are driving to the cottage tonight, so we will be able to see the majority of it!
And Survivor started off with a bang - Go Heroes!