6:30PM Friday night and I cast on my first stitch. In the bedroom, so as to be near the clock to provide picture proof that I did not jump the gun. Have a false start. Start too early. 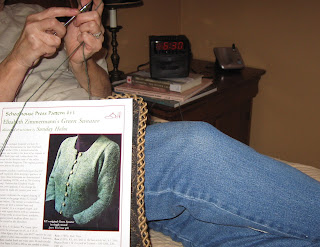 It appears as if I am gripping the needles for all they're worth. And perhaps I was. It is the Olympics after all. Friday, I knit furiously for what seemed like forever and finally got to the fold line for the hem about the time my fingers gave out for the night. To put that another way, everything I knit Friday night will be turned under for the hem. Nothing I knit Friday night will be seen on the public side of the sweater. I was cursing the choice of a sweater with a hem.

By Sunday night I was pleased with my progress. With family visiting all weekend, there was not a minute to knit until late Sunday afternoon. I was certainly worried, but by Sunday night, progress was good. 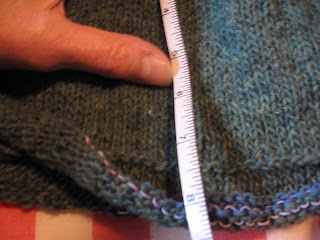 The knitting has been moving along smoothly. The yarn is nice, gauge is dead on and there have been no pattern problems. Of course, "join in the round and knit stockinet stitch for eleven inches" isn't too problematic. Creating four steeks might cause me grief. 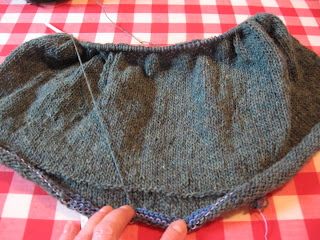 Ingrid called Friday morning and joined our Olympic team. That makes ten knitters going for the gold. GO KNITTERS GO!!
Posted by Brendaknits at 11:12 AM

Yep...those knuckles look a little white! :-) I really like the yarn you're using for the sweater. Best of luck! I'm doing a Ravelympics project too - a scarf made with 25-year old yarn. It's slow going so far...and only a scarf...imagine that!

Looking good!
I haven't started yet.....