Zieknits (rav link) and Sel&Poivre both commented on my previous post, asking if I basted Waterloo when I blocked it. They though they saw basting stitches in the photo I posted on the blog.

What they saw. I think, was pins. When I block my knits, I use a blocking board purchased years ago at London Yarns. It is a three inch thick piece of foam, about three feet by three feet, that has been glued to a piece of Masonite and covered in cheerful red gingham.

The gingham is a one inch check and for lazy knitters like me, it becomes my second measure tape. I know, I know, it is fabric, it can stretch and it is probably not accurate. But so handy as a double check.

The knitting is laid out to size and pinned to the foam with these pins. 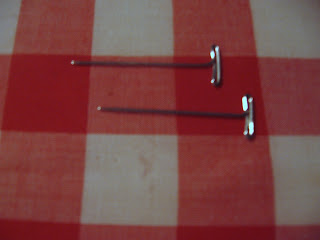 ' T ' pins. With no plastic, they don't melt with the iron and being quite long, they hold tight in the foam. Most yarn stores - and perhaps even quilting stores - carry them.
Not to leave you hanging over the weekend, WCF's sleeves are moving along. Perhaps not quite as quickly or without incident as I had hoped. Here is sleeve number one. 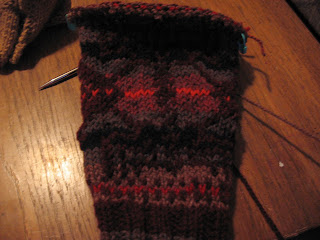 The tricky part, I have discovered, is knitting the chart so as to have the main motif running up the centre of the sleeve. What's that you say? Some knitters wouldn't be so fussy?

Well, yes, I know that. But to me, the main motif simply has to go up the centre. To have the motif in the middle, means, in the case of my sleeve, that there is one complete and two partial motifs on either side. Finishing the round is no problem, just knit the chart until out of stitches. But beginning the round --

Each round I count backwards in the chart to determine where in that chart row, I should begin. I start there and hopefully 'come out right' when I reach the marker designating the beginning of the full repeat. Of course being a sleeve, increases happen every three rounds, so my 'start spot' changes too.

One would think that because I must do this backwards count on every round, that I might remember to count BEFORE I start knitting. But those darn television shows really distract me. I start off right about half the time. Process. Process. Soon though, as I travel towards the top of the sleeve, I'll have complete charts on either side of centre. Easier knitting then.

Have a great weekend everyone, with lots of knitting time.

Posted by Brendaknits at 7:42 AM

Did you catch the preview for Survivor Heros and Villains last night? It was an interesting recap on the history of the show and there looks to be some very strong personalities coming on.

I am very interested by your sleeve process - that is going to be rattling around in my head over the weekend for sure!

BTW I switched how I follow your blog from plain subscribing to following from my blogger dashboard and I'm seeing your posts almost as soon as they go up rather than after a 24 hour lag. Much, much better - I saw the awesome productivity of your knit group on Thursday rather than more often than not, on Monday when I log back on after the weekend off line!

I feel exactly the same way about sleeves - the motif must be centred. And I count backwards just like you!

Thanks for talking about the pins. And the gingham? Genius!

I applaud you for centering the sleeve motif. But I confess, just the description of how you do this makes my "spatially challenged" head go all 'splodey. :)