Day 5 was Phoney Seams day. Is that something that a dope test might catch? No, it is Elizabeth Zimmermann's way of making a knit-in-the-round sweater appear to have side seams. Making it appear to have been knit in pieces and sewn together.

The why of Phoney Seams escapes me. For a knitter who believed as strongly as Elizabeth did in knitting in the round, why bow to the pressure of the knitting world and make the work appear to have seams? Being 'phoney', they don't add the flat knitters argument for seams -stability.

In many of her books, but particularly in The Opinionated Knitter, Elizabeth speaks angrily about editors that took her knit-in-the-round designs and turned them into pieced knitting. So why she created the phoney seam, I don't know. Perhaps to trick them into leaving her designs alone.

Day 5 of the 2010 Olympics saw me, for the first time ever, creating a phoney seam. It isn't difficult, but I wonder if they are worth the effort. I will let you decide when you see the pictures.

Here is what I did.
*Knit to the underarm.
*Place 31 stitches on hold for the underarm gusset.
*Take the centre stitch of the gusset and drop it down to the hem fold line. 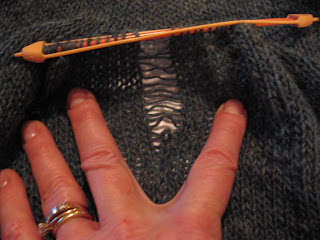 Despite the anticipated disaster of a dropped stitch, I can assure you that dropped stitches don't run like a marathoner to the bottom. They have to be greatly encouraged to do so. Especially if knit in wool.
*Once the stitch is at the bottom, take a crochet hook and hook the stitch back up by hooking first one bar of wool, 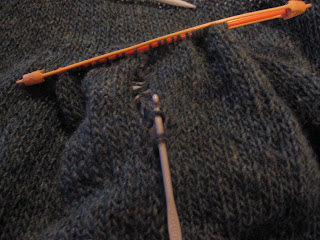 then two bars at once. 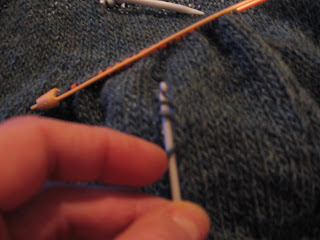 *Repeat all the way to the top and - in theory - this line of stitches will look 'different' than the others and appear to have been seamed. 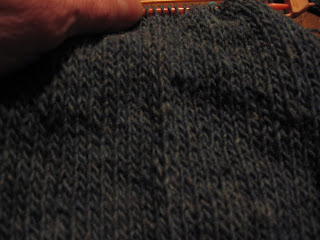 The Green Sweater is knit with fine, one ply wool and perhaps that makes the phoney seam disappear into it's neighbours. Thicker yarn might be more revealing. Can you see the difference?
Except to follow in Elizabeth's footsteps, as I have resolved to do in 2010, I'm not sure I would bother with a phoney seam. But Olympic Knitting is all about stretching and reaching so I am glad to have done it. Once.
Posted by Brendaknits at 8:08 AM

I've never understood the need for them either. But I understand the concept of sticking to tradition.

I can see the difference! It does "seam" to though, that by hooking first one and then two stitches together it changes the structure to make it less stretchy doesn't it? If so does it make it more sturdy at all?

As to the "why" I don't know about seams but what "girl" doesn't at least occasionally rely on a little optical illusion to improve an overall impression?

Seriously thanks for sharing this!

I think they're meant to give the sweater stability...or something. They're also a good marker for blocking...I guess. But if so, why wouldn't EZ have said as much, in her inimitable way? Hmm....

I had no idea that's how faux seams were made, though. I've never done them, and thought they were just knit in as-you-went. Not sure I'd be willing to ladder down, so more power to you.