Seen here  inside out and on the blocking board. 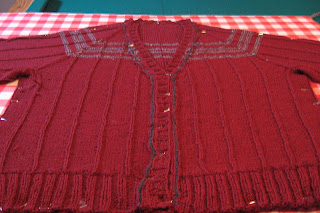 I am a steam blocker and to prevent the heat from discolouring  the yarn, I always block inside out.  Pin out to size, then hover the steam iron over the garment until the heat and steam set the stitches.

This photo I snapped as Fred began to put it on. 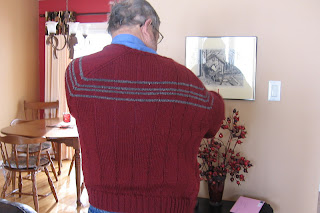 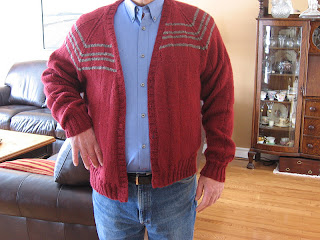 It fits, he likes it, it looks good and I'm happy.  There are no buttons on it yet, and Fred seems to think that means he can't wear it.  Hah!  He turned down my offer of a shawl pin.

Yarn:  Ella Rae. 100% wool.   I purchased 8 balls of the wine colour and one white.  According to Ann Budd's yardage chart,  in this weight of yarn, a 48 inch sweater requires 1800 yards.  With 200 yards per ball  but  only eight of the wine coloured balls on the shelf, the white was meant to make up the difference.  My thoughts were a white band on the upper chest.  As you can see, that didn't happen.  I used 6 balls of the wine coloured yarn and a bit of stash grey for some interest. 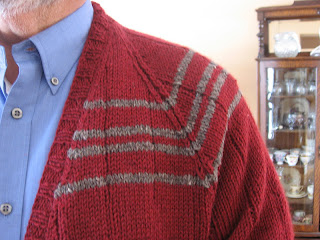 Pattern:  Personal.  Based on Elizabeth Zimmermann's percentage system.  I used a sweater from Fred's wardrobe as a template, measuring it and casting on enough stitches in the gauge of 20 stitches over four inches to give me the 48 inch finished chest.  Did I do a gauge swatch?  Does   a gauge sleeve count?

Method:  The sweater was knit in the round in a pattern of  K9, P1.  The purl stitch was inserted to give both the sweater and the knitter some interest.  Once the sleeves were joined to the body, I knit about one and a half inches to give some freedom under the arms before beginning the raglan decreases.  At the same time as  the raglan decreases were begun, I also started the 'V' neck decreases  - but at half the speed.  Raglan lines were decreased every other round, the neck every fourth round.  When the sleeves had five percent of total stitches left, I worked back and forth on the sleeves and back only.  Elizabeth's method to raise the back neck -works perfectly every time.

Steek:  This centre-front steek, I crocheted.  My first-ever crocheted steek, was on my
'Lloie's Anniversary Cardigan'.  Another EZ pattern.  While slower to do than racing up the centre front  with a sewing machine set on zig zag, it gives a beautifully and totally finished edge.  No need to tack down yarn ends on the inside of the sweater.  The crochet was done in a finer yarn - in this case, grey sock yarn.

It was an easy, quick sweater to knit and if there had been no  seasonal hullabaloo would most likely have been finished inside of three weeks.

Wow, terrific. You and EZ make a great team!!

Great outcome. I have the EZ book, the Anne Budd book and the Knitting in the Traditional Way book, have made some from scratch without these resources--your work makes me realize I must try that way.♥♥

Looks great. I'm intrigues by the crocheted steek. Thanks for describing it. I'll give it a try (ummm, swatch first).

My next steek is going to be a crocheted steek. The sweater is fantastic!