The End Of The Never-Ending

Some fool notion got into my head in December, making me think that knitting a six-foot, Linen Stitch scarf with sock yarn was something I should do.  Something fun to knit.  Something to fill the time between major projects.  Fill the time it did.

Fortunately, Denise of Needles & Things  gave me a suggestion from a friend of hers.  Knit it in the round she said.  No nasty purls to slow you down.  It was possible to go slower?  By the middle of the second  row of 500 stitches,  trying to Linen Stitch in purl, I knew that  I would never knit this scarf  and remain sane.  Despite having to re-cast-on those 500 stitches,  Denise's friend's idea started to hold great appeal.  I frogged and started over. 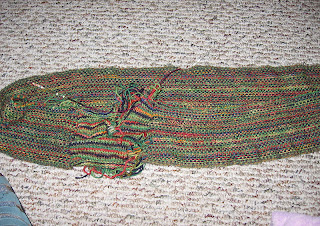 Changing colours at the beginning of each row, I left a long tail.  In hind sight, the 30 stitches provided enough of a 'tail' of yarn and I  probably didn't need the 'long tail'.  No matter.  No harm done and not enough wasted to be a bother.

If possible I like to knit a scarf lengthwise.  Much less 'to-ing and fro-ing'.  The initial cast-on can seem endless, but once started, the thought of only knitting five inches is very motivating.  Especially in sock-weight, Linen Stitch.

Last night I cast off and cut up the centre of those 30 stitches. 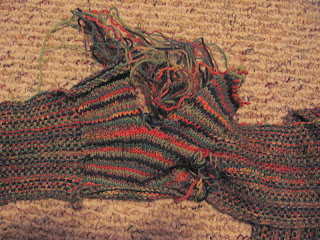 Six feet in length, using three vareigated and three solid-colour sock yarns, the scarf  is lovely - even with a very tangled, unblocked fringe.  The thing about Linen Stitch is that it appears to be woven.  Without purchasing a costly loom, this is a close as I could get to a woven-look scarf.  Of course as my Dad would say "  If your time is worth anything...."

Yes, I know, the loom might have been cheaper.  But the scarf is finished. I like it.  The colours are wonderful and the never-ending-ness will become less a pain and more a great story with each wearing. 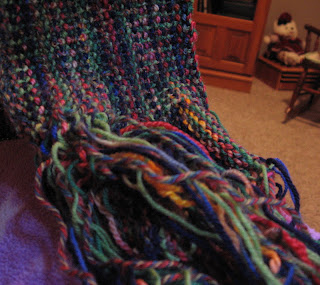 Oh I so love that scarf...I couldn't get past the cast on...maybe I should rethink that decision - yours is so fabulous!

Ido love the look of linen stitch, but one scarf of it was enough to send me to a loom! (actually winning a 50-50 draw at work a few years back, and it being almost EXCATLY what the LeClerc loom was going to cost me was the real tipping point).
BUt I do love my loom...

The scarf is lovely.

That turned out beautifully. Doing it in the round is really the only way to go. I tried doing regular linen stitch once and found it drove me mad on just a wee swatch but in the round appeals.

Knitting in the round was a great idea for that! Definitely have to keep that in mind.