A few weeks before the stockings were hung and visions of sugar plums danced, I received an email from the qivuit blog, telling me I was their December winner of a pot of gold  some Qiviut yarn.

The email was most nondescript and fearing an open invitation to a virus, I almost didn't double click.  But the word Qiviut gave me courage.  Then the message announcing me as winner made me suspicious.  Me?  Winner of nothing ever?  Had I entered a contest?  In the bustle that is December, I couldn't remember.  But it sounded like something I would do - enter a contest to win some Qivuit.  What knitter wouldn't?  And just how dangerous could an email be with the word Qiviut in the header?  How vulnerable could I be by simply giving these folks my post office box number?  Those hours of indecision took a nano second.  Before you could say Rudolph, they had my address and I eagerly anticipated holding my very own Qiviut.

I am not totally unaware of the glory that is Qiviut.  Several year ago,  in the Jacques Cartier store in Banff, I drooled, ogled and fondled the yarn until I was sure the staff were ready to call someone.  Police, loony bin.  I really wanted some of that yarn.  But the price tag of $65 for a 25 G ball back when most yarn was priced still in the single digits, gave me pause. Wondering what it might be like to have money.  I did buy a Wool/Qiviut blend at half the price. 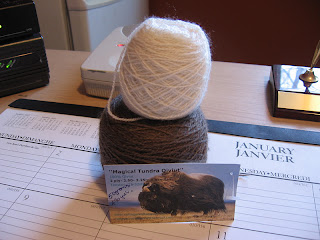 Ask me how merry that made my Christmas.   Sugar plums?  Hah!   My visions are of  a wonderful. lacey, warm, cozy, scarf/shawlette.
Posted by Brendaknits at 10:41 AM

0h-my-gosh, that is a knitter's pot of gold! A wonderful Christmas surprise. Augurs well for the best kind of New Year!
Congratulations, Brenda!!

Lucky you!! I wish you and yours a very good year. May you get more wool than you can use!!

Ooooh, a pot of gold! Congratulations! Definitely a bright side to the holiday season. =) I've never seen or felt quiviut myself, but I have heard stories.

What a way to start the New Year! You'll be spoiled for all other fibers.

How lucky are you? This is wonderful good fortune. Have you chosen a pattern yet? I'd be overwhelmed with indecision about how to make the most of such rare yarn.

Can't wait to see what you'll knit from this magical yarn.

so lucky, you are..bring it to knit group so I can have a feel !

May I suggest one of Donna
Druchunas' patterns from Arctic Lace? They're available from KnitPicks for $1.99. I got to fondle Donna's scarves in our workshop on the cruise and I am now madly envious as well as happy for you.