Thrumming is fun!  In just a couple of days, I knit this hat. 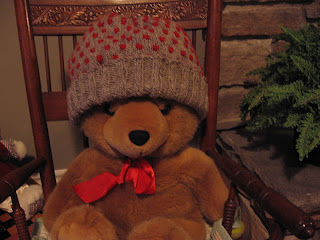 Using some left over Briggs & Little yarn at 18 stitches to four inches  and some left over B&L roving, I cast on 112 stitches.  In retrospect that was a few too many.  96 would have given me a  closer fitting band.  The 112 came from some ravelry research where knitters knit their thrummed hats using  knitting worsted yarn, at 20 stitches to four inches.  I knew my yarn was a bit thicker   BUT    to increase wind resistance and keep the thrums from getting loose  I decided to use smaller-than-normal needles and chose 3.75mm.  With that smaller needle, I thought  I needed the extra stitches to compensate.  Turns out I didn't.  The hat won't blow off but could have benefitted from a tighter band.

There are four and a half inches of 2x2 ribbing - enough to fold double over the ears.  Three rows of plain knitting follow the ribbing before beginning the thrummed rows.    Thrummed rows are
three rows apart.  For no particular reason, I chose to offset the thrums.  The first off-set row required concentration but after that it was simple to follow the pattern.

Knitting for an average adult, I knit the hat to a depth of five and a half inches from the bottom of the folded ribbing before beginning the decreases.  My hats and my socks have decrease rounds in common.  I prefer the 'rounded' look.  To accomplish this, I decrease every other round until half the stitches have disappeared, then decrease every round.  That faster rate of decrease keeps the hat a bit flatter, less pointy, on top.

The hat is fun and warm.  Not  your 'steppin'-out-in-style' kind of hat -  at least south of the Arctic Circle it's not - but practical.  Great for a walk on a cold, windy, winter's day.  With the added bonus that is it perfect for a great  Hallowe'en costume or the Teddy Bear's Picnic. 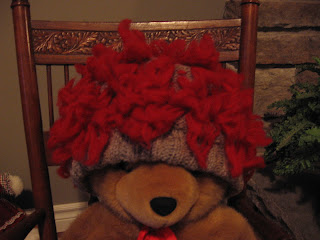 Posted by Brendaknits at 8:41 AM

Teddy sure looks cute in that hat. Will he give it back??? I would NOT if I was him ☺

I've always wanted to try knitting a pair of thrummed mittens, but a thrummed hat? Never thought of it! Must be super warm, and looks good too!