From time to time, I've been rattling on,  about my Colour Block sweater. Presumptuous, I know, but there might be some that are interested to know how I knit  this sweater without a pattern.  First I talked about how to  cast on for the neck and shoulders, then how to do the sleeve caps.

Since the sweater is a top down, I am moving down the sweater as I explain it, which brings me today to the  neck line.

Quite easy actually - at least less complicated than the creation of the shoulders seams.  I wanted my neck line to be a scoop neck, lower on the chest than a crew and  to be off-centre.  Before starting, I made the decision to add borders post-knitting, rather that simultaneously.  Here's how I accomplished all that.

This is a top-down, knit-all-in-one-piece cardigan.  Being a cardigan, I am knitting back and forth rather than in the round.  Once I had the shoulders started, the sleeve caps and yoke began at the same time.  I added no extra stitches to the shoulder width for either front side, but simply knit back and forth for a few inches.  Once the depth of both fronts was  about one inch short of where I  wanted it to be, I worked some increases.  Three times, at one stitch in from  each front-neck edge, on the right side row only, I increased one stitch.  That give a gentle curve to the bottom of the neckline rather than a square shape.

But I also wanted an off-centre neck line.  So on the next right side row, I did nothing extra at all to the left front, but for the right front, I cast on several inches of stitches.  How  many inches?  Enough to take  the   right front almost all the way across to meet the left front. I stopped about an inch short of the left front to leave room for the button bands.

And here it is.  Notice the centre back line where the colours join to give you a reference of how far off centre the front neck line is.  Shoulders, Sleeve Caps, and Front Neck Line - all done.  Straightforward knitting from here on in.  Stay tuned. 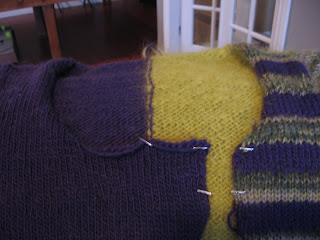 Posted by Brendaknits at 9:44 AM

It is going to be so pretty! I love how it is coming together.

Are you writing all this down as you do it, or before you do it? You have a great imagination! I only steal ideas from others... heehee.