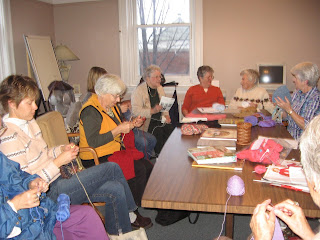 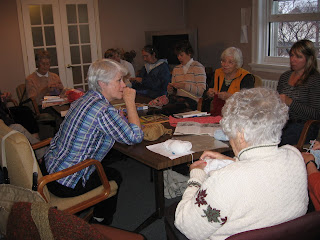 Great crowds gathered at knit group today. 14 is a large number for our small group, our small town.

Pat was out today. Her foot troubles have kept her house bound for some time now so it was great to see her back at knit group. The bad foot hasn't kept her from knitting. Here's our Pat. 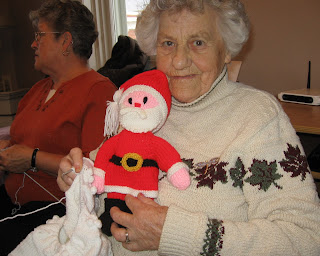 with another toy for the women's shelter.

Nicki, too, has been MIA for some time. Her boss just doesn't seem to grasp the concept of - Thursdays Are For Knit Group. Nicki showed off her Cowichan. For you non-Canadian readers, Cowichan sweaters were knit and made famous by the Cowichan native peoples of Vancouver Island. They were mostly natural colours, as is Nicki's.

Vera (Nicki's Mom on Vancouver Island) this picture is for you. Look at that smile. 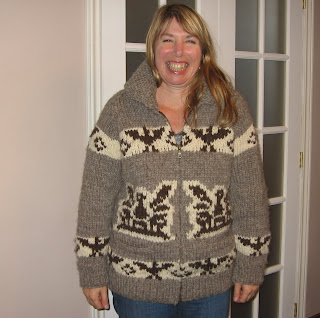 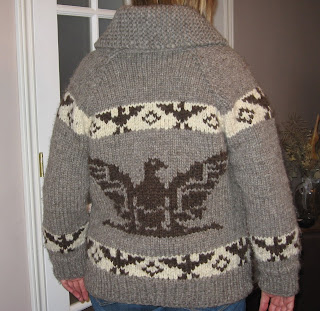 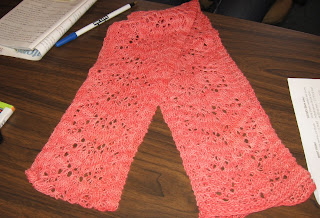 Made from very fine cotton which arrived in Nicki's hands in an 'un-liked' shade of green. Look what some Kool Aid can do to green cotton.

Bonnie's Grandaughter called and asked if Bonnie would knit something for her. She added "Each time I wear what you knit, Grandma, I'll think of you." Of course Grandma couldn't resist. She's a bit worried about the size, though. 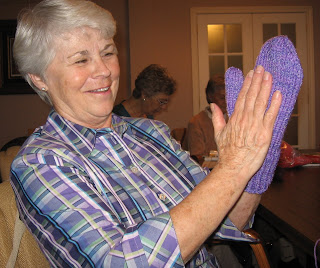 Joanne is working on a red scarf for her daughter. 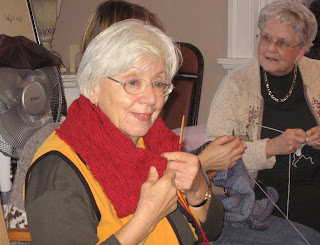 Current styling dictates that scarves be worn doubled as Joanne shows here. Joanne calculates her knitting is half done.

Wilma is making this darling sweater for her Grandaughter 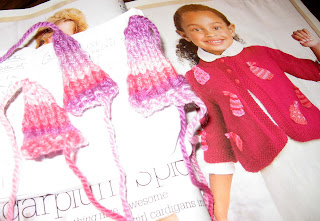 and spent knit group making those non-three-dimensional toques that decorate the sweater front. How cute is that?

And survivor. How about that Russell? You have to give him credit - he's smart. Some players look for the entire game and still can't find the hidden immunity idol. Russell has now found two!
Posted by Brendaknits at 6:18 PM

I love Nicki's cowichan!! Awesome job, no wonder her grin is so huge. Where did Nicki get the pattern? What yarn did she use? I'm wondering because I'm planning on working on a cowichan during the olympics.

Russel kicks butt!! I'm impressed all to heck. He's still a snake in the grass, but when he's being a bad boy, his smile is infectious.

Love the pictures of Nicki :-) Sad that I have to wait for them on your Blog :-)She sure did a great job on that sweater. Her Dad loves it too. All other pictures are interesting. You have a nice group. I like the toys that Pat makes. I bet they are appreciated.

Gorgeous Cowichan!
You have such a talented group.