Knit group is back at the library. The library, dried out from it's tornado-induced flood, has been repainted, re-decorated and it looks Wowzee!! Of course painting it an olive-y green made my day. One of my favourite colours.

And the knitters were on a roll. Doreen has the motivation of her Church Bazaar. Another scarf. 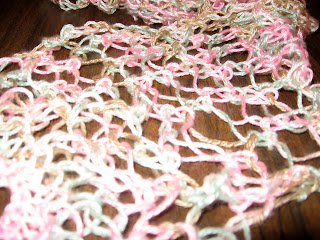 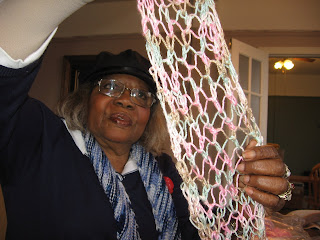 Another dropped stitch scarf. They are so lacey and have wonderful drape.

And not just scarves, Doreen knit this little vest. 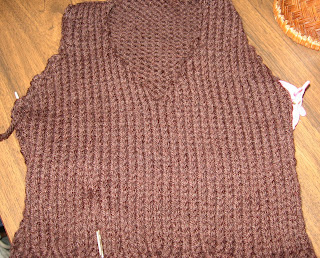 Just waiting for it's contrasting trim. So cute. 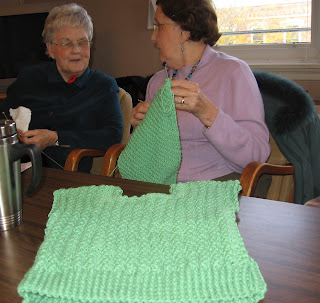 Nell's Mother knit her one in the same pattern but red when she was a little girl. She loved the vest and all these years later, remembered the pattern. This lovely green one is for her mission basket.

After knit group last week, Nell forwarded this photo from last week's post to her son in Halifax

and asked him if he didn't think the three scarves were cute. He replied that the scarves indeed were cute, but he thought the three knitters even cuter. That's a son!!

Sharon is knitting her husband a sweater. 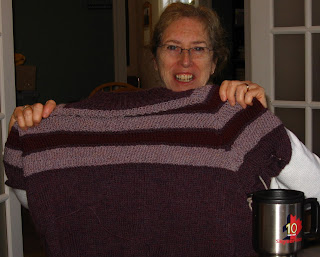 An identical one - except for colour - to the sweater she knit for him a year or so ago. Why is she doing that? Well, turns out, Sharon and I do the laundry in a similar fashion. The first sweater has been felted.

Her hubby picked these colours himself, and I think they are simply asking to be teased. How about " Real men wear 'claret'." Or " What colour is that, hubby? Cabernet Sauvignon or Merlot?" Or "You are a true man of the grape".

As for Survivor - Mr. nasty oil exec is actually growing on me. When I heard he had twins I thought perhaps he couldn't be all bad. But his tribe has been decimated. Will the merge happen tonight?

I leave you with a great picture of two of our knitters at a Hallow e'en party. Not at all related to knitting, but don't they look wonderful? 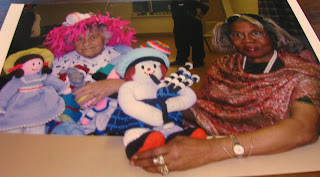 Posted by Brendaknits at 7:40 PM

Russel's brain went into overdrive after the merge. He's playing the game to the hilt. It was very interesting to watch.