My own personal knitting took a backseat these last couple of weeks, as I prepared some samples for Knitfest 2011.

One of the fun things we  planned for the day was to give everyone a bag of 'bits and bobs' of colour coordinated yarn so they could create one giant ball of 'Crazy Yarn'.

Crazy Yarn came to my attention a couple of years ago while browsing in a not-so-local yarn store.  There, I saw a lovely scarf on display with  several  different yarns in it.  When I mumbled something about the cost of buying all those different yarns to knit the scarf, the store owner pointed me towards the one  - and only - ball of yarn used in the  scarf.

It was a ball of yarn created by tying several different yarns together.  Knots were left with ends hanging as part of the design feature.  My first thought was "What a great way for the mill to get rid of short pieces of yarn and still make a profit."   My second thought was  "I can do that."

My first Crazy Ball Of Yarn project was this Shape It Scarf from Sally Melville's 'Book 1 The Knit Stitch'. 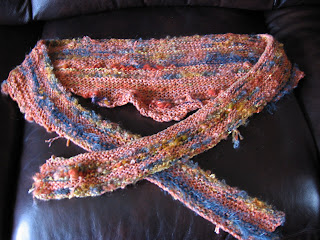 Second was the same pattern in different yarns. 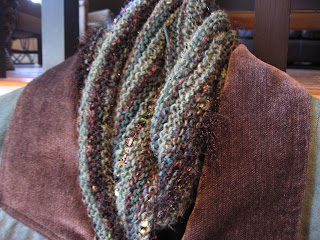 In preparing for Knitfest I knew that a ball of yarn would only do half the trick.  Knitters would want a pattern.  But, since I'm known in local  far-and-wide knitting circles as - The Copyright Queen Bitch - I couldn't bring myself to hand out Sally's pattern.  I would have to get to it and create my own. This is the result.  A little scarf with some shaping. 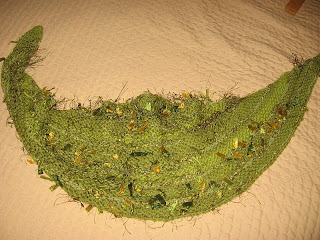 At this point, it seemed to me that  the best use - and maybe the only use -  for Crazy Yarn was scarves.  But Knitfest 2011 was not about scarves. It was about sweaters - Top Down sweaters to be exact.  With the personal, designer touch of adding a cable,  some lace or the knitter's  favourite stitch pattern to the basic sweater.

Would  Crazy Yarn look good in a  sweater?  I decided to find out.  Using the Basic Cardigan pattern from the book  used at Knitfest - Need A Baby Cardigan?   I knit a one year size placing the Crazy Yarn in the yoke but using plain yarn for the rest of the sweater. 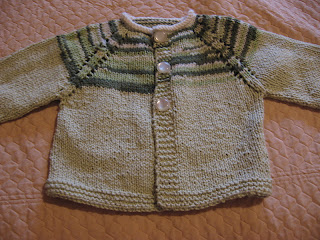 I couldn't decide if I liked the 'knotted' look in a garment and wondered whether I should take all knots to the inside.  In the end,  for demonstration purpose - and to delay my final decision -  I left the knots out on the back but took them to the inside on the front. 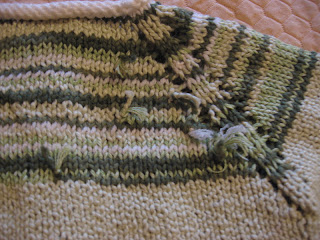 It's dang cute and received many  approving murmurs when displayed at Knitfest.

There are two secrets to  creating a ball of Crazy yarn.  One - make the yarn first.  It seems obvious but some might think that you tie yarns together as you knit.  But no.  Create the entire ball first - it will give the garment a much more random appearance.

Secondly  - tie the colours together randomly and in varying lengths.  With the orange   scarf ,  I had much more of one yarn than any of the others.   To accommodate that, each time I was ready to put in the main yarn, I simply measured off  (using the Old King Cole method of  nose to finger tip)   much more of it than  any of the others yarns.   If I went nose-to-finger-tip ten times with the main yarn I might only do that once or twice with the others.


And perhaps third - yarns do not have to be the same gauge.  Varying lengths, a variety of colours and gauges and knots that show and you have one Crazy Ball Of Yarn.

Since Knitfest 2011 was all about releasing your inner designer, the Crazy Yarn project fit right in.   And you can thank me for giving you one more reason to 'knot' throw out your little bits of leftover yarn.
Posted by Brendaknits at 11:02 AM

I'm the Copyright Bitch in my Guild as well...
Love the idea of using it in a sweater!

The sweater idea is such a great application for this - especially for a child's/baby sweater!

What a brilliant concept! I think the tiny knots are pretty cute on the sweater, but the scarves steal the show!

wonderful idea!!
I'm so thrifty with my yarn... I don't throw away ... much. Can't wait to use this concept! Yoke of a sweater is brilliant, by the way.