Sometimes, circumstances just allow for   laughter.  It happens often at knit group, but today was laughter to the 'max'.

Perhpas it was the smaller crowd.  Wilma, as I write, is winging her way out west on a family visit.   Ingrid is driving to Victoria,  helping to relocate a loved one.   Sharon had to do an airport run to pick up her husband and Gail was caring for grand kids.  With only  eight knitters at knit group today perhaps some felt freer to tell their stories,

Or perhaps it's the shorter days,  what was eaten at  lunch or the next full moon.  Whatever the reason, laughter reigned supreme today.  It started with Bonnie.

She made a lovely scarf for her daughter's  Christmas gift.  Last night the daughter popped in for an un-expected  visit, spotted the scarf  and said " I hope you're not planning on giving that to me, Mom!"    She didn't like the scarf. At that point Bonnie turned to the grand daughters who had come along with Mom for the visit and asked them if they liked/wanted the scarf. They too turned it down!  This is how Bonnie feels today. 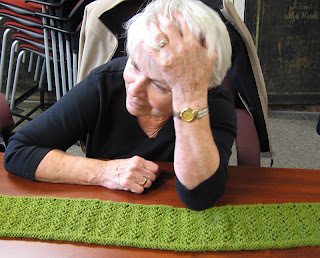 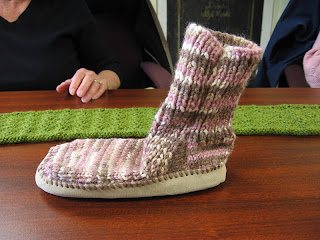 Who are you  giving these to Bonnie?  Likely, not family.

Ruth has made several squares to be sewn together for a baby blanket.  I tried to spread them out to better photograph them, but got  'spoken to'  by Ruth.   "They're in order!" she said. 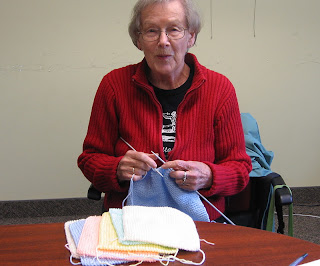 Hmmm.  All six of them.  Okay.  Sorry, Ruth.
Doreen, though, was the cause of the most laughter.  She is still knitting the big red sweater for a friend.

She is sick and tired of it!  Sick and tired of not having any kntiting time for her own projects.  Sick and tired of the awkward yarn and difficult patern.  Just plain sick and tired of it!!   To top that, the friend is not responding with the amount/type of gratitude Doreen is/was expecting or that Doreen feels she deserves for such a favour.  And we heard all about it.  In detail.  With emotion.  Conversations repeated, verbatim.  More than once.  Hilarious to all but Doreen.  Really, Doreen - we're on your side.
It was fun to have Nell back from her month-long stay in South Carolina.  Looks like her crochet hook didn't take a vacation at all. 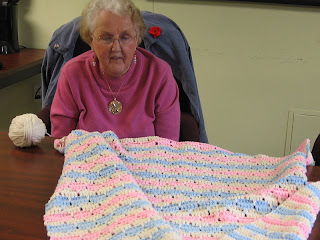 Nice blanket, Nell.  Most days in South Carolina were 25'c   Nell says so I hope she' ready for winter because here, today, it was 9'c.
See how nicely I worked that weather report in?  That's for  New Nan who is in the city  - down south  compared to Meaford -  for a few weeks and  emailed wondering if the weather is  warm enough for one last trip to her Meaford  summer home.
If laughter does indeed have healing powers, then those at knit group today are dang healthy!

Posted by Brendaknits at 7:14 PM

I seriously had no idea it was Thursday until I saw your post. I've spent the day believing it be Wednesday Thank goodness I can look to the Meaford Knit Group to keep me on track down here in the warmer south!

Ahhh, yes. So many examples of why I no longer knit for anyone but myself.

My lightbulb moment was when I commented to a niece that she was wearing the socks I knit her. "Oh, yeah. I forgot you knitted them."