Well, look who arrived with a finished sweater today. 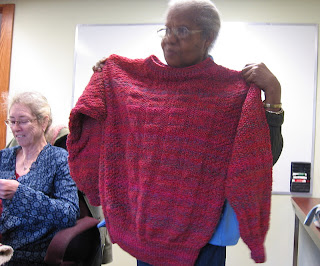 If it isn't  'wound-up-tighter-than-a-drum'  Doreen.  We decided if the friend isn't thrilled with the final result  well ...   as luck would have it,  it fits Doreen. 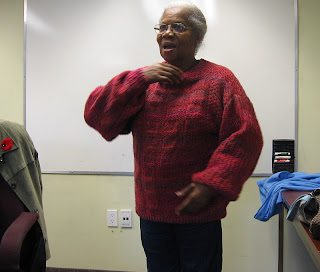 Ruth arrived today with a baby blanket of 36 squares. 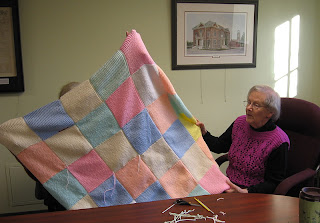 The squares that last week, she warned me not to mix up as she had them all laid out in order.


She looks pretty happy about it being finished. 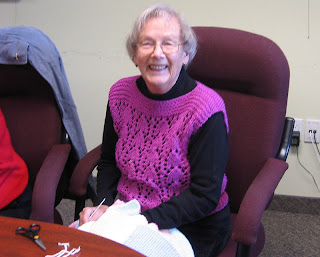 Her sister knit her that lovely pink vest.  She could be smiling because she told us she spilled pea soup on it at lunch time but managed to get it wiped off before her sister spied the offending stain.

Gail, managed to severely slice her thumb and is only knitting dish cloths.

Her reasoning is that if she bleeds on her knitting she can bleach out the stain.  Where there's a will - eh, Gail?  Nothing will stop a knitter.

Sharon has treated herself to a pair of pedicure socks. 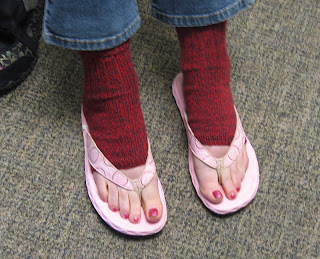 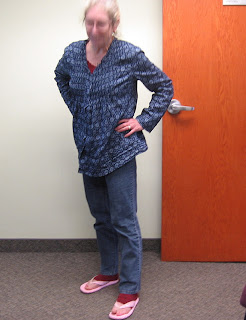 I guess a girl that gets frequent pedicures might need those socks.  I wouldn't know.


Nicki spent her afternoon ripping back the  baby sweater begun at Knitfest 2011. 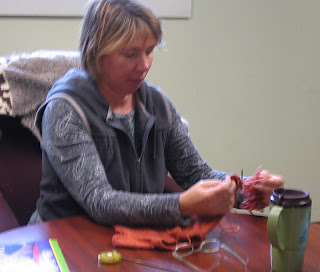 She complained about running out of yarn until I advised her to measure the length of the sweater.  Dang!  An extra inch will do that. Ribbit!
Nell began the afternoon with one baby bootie. 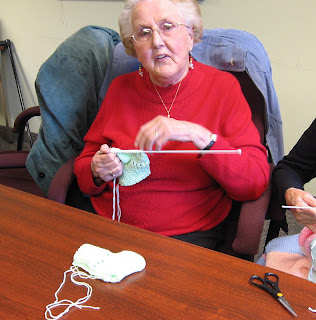 By the time we were picking up to leave, bootie number two was finished  - including a croched tie.  That's speed knitting.
Fun again and lots of great knitting.  By next week we will know  Doreen's friend's response to Big Red.  Can't wait to hear, Doreen.

Posted by Brendaknits at 5:28 PM

I love Doreen's sweater! Gorgeous as ever ladies.