Its Not A Race

Teachers and Mothers often tell children "Its not a race"  to encourage them.  Letting them know their slow pace in no way diminishes their effort.

I try to remember that sometimes often, in my knitting life.

Take the current cardi on the needles. 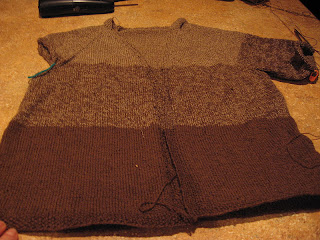 Started the evening of the KW Knitters Fair - that would be September 10 - it is still on my needles.  My excuse is - well, I guess I have no excuses but should you wish to feel empathy for me and my efforts, then know  I did take a vacation, knit a couple of projects for Knitfest and the yarn is teeny tiny.

AND!  There was Hallowe'en.  In it's favour, the cardi is simple stockinet knitting.  No fancy stitches, no lace, no cables.
So Brenda said to herself   " I can knit on this simple stockinet cardi between door openings to serve the 200 plus  kids that rush our house every October 31."   Knitting towards the final colour change on the first sleeve and being only  one- half inch short of the required seven inches, 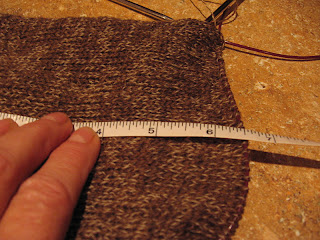 I saw those couple of candy-serving hours  as a chance to race towards the finish line. Which might have worked if those kids had been taught patience.

But little witches, goblins, princesses  and Harry Potters have no patience.  Apparently if the door is not opened within a nano second of the bell being rung, they think the idea is to ring the bell again.  And again.  I know that you know,  but those kids had no idea the havoc they wreaked on my little cardi.

Hallowe'en landed me further behind, not ahead.  Several rows  had to be ripped out, picked up and re-knit.  Not normally an excruciating experience, but with two strands of teen, tiny, lace-weight yarn, I'm looking for a corneal transplant.

Four days later and I'm almost back on track with almost  all the dropped, single strands of the double- stranded stitches having been repaired.  And sure, I know it's not a race but there's great humiliation  - and no ribbon - in coming in last.
Posted by Brendaknits at 9:55 AM

I can sooooo relate to your frustration! I do the same thing all the time - that is I anticipate progress (perhaps too optimistically?) then suffer terribly when I actually end up with something that is less than what I started with!

It is looking pretty fabulous though!

Ah yes I am familiar with this too. My sense of time is severely lacking when it comes to knitting.

Wow! You get slammed on Halloween. I live in the country and have never had a single trick or treater. I go in to town to shell out at my daughter's house while she and DSIL take the boys out. I always sit on the steps inside her split level entrance working on a simple sock because we know kids can't "wait until I finish this row."

It's not a race, says the teacher who is the slowest knitter ever! Your cardigan is looking lovely though.