What a difference seven days makes in the weather.  Last week, at knit group, complaints about the cold, grey weather circled the room.  Today, the opposite - exclamations about the heat. 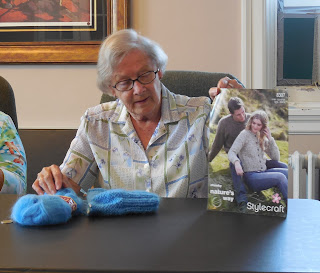 The yarn was a gift.  The beautiful blue colour will really brighten a winter's  day for you Ruth.

Ruth said it took her some time to find a pattern  that matched her gift yarn for both gauge and quantity.   She finally found one, but  she finds it  disconcerting as it is written in 'metric speak' only. 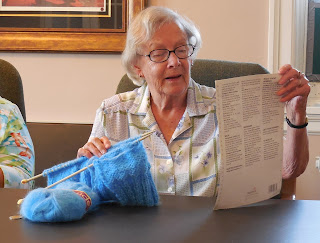 She had to buy a tape measure that speaks both languages to help her  translate.


Sandy B, as promised, wore her newly-finished Linen top today. 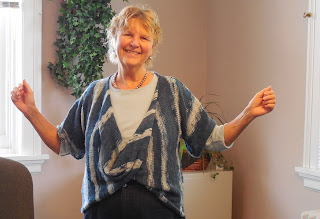 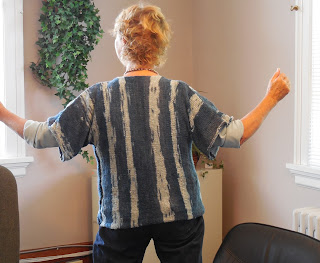 It is gorgeous.  Such a simple design - two rectangles, knit sideways, the front  longer than the back to provide extra fabric for the twist.  I suggested that her striped yarn gave the piece extra pizazz.  But Sandy said the display garment that originally caught her eye in her LYS in Florida was done in black.  It too was gorgeous, she said.

We made her try it on backwards, just to see. 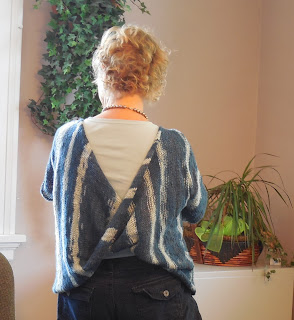 Doreen pullled a very old work-in-progress scarf from her bag and asked me if I remembered it. 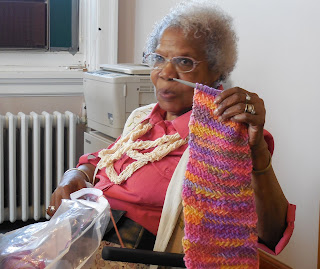 I didn't.  Until she reminded me that  it is knit in what, at the time, was a new-to-her stitch and   initially  it caused her great  grief.  Once she mastered it, she put the piece away.  It's now been sitting so long she wonders if  she remembers how to do it.

I liked the scarf she was wearing. 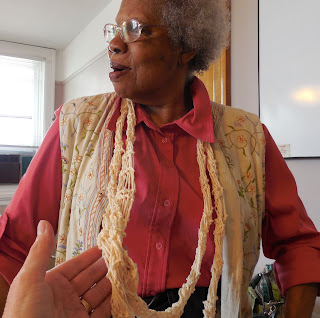 A long, ropey scarf, knit with a row  - or sometimes two  -  of garter in between rows of double, dropped stitches.  Very open and very summery, Doreen.

Doreen's other project of the day was to learn how to use her  new Ipad  a gift from her son. 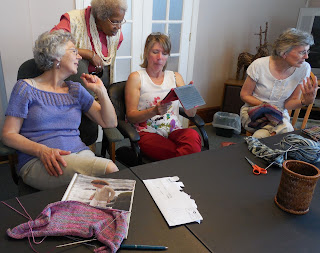 Wilma, a relatively new Ipad owner herself and  wearing Gemini that she knit last summer,  listened in on Doreen's lesson.  In front of Wilma is her latest project. 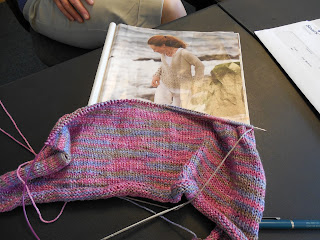 A sweater with a knitted upper portion and crocheted lower band.  In a colour that coordinates well with  her Gemini.  A twin set perhaps?

There was talk of  beach knitting now that the weather has turned.  What could be more perfect than knitting on the beach - unless it is knitting at the library.  Either one pleases.

Posted by Brendaknits at 6:53 PM

Labels: Thursdays Are For Knit Group 2013