Thursdays Are For Knit Group and ?? - Loose Ends

With no Survivor tonight - or for that matter until fall - I am at loose ends. It's a good thing Knit Group doesn't break for summer.

This fellow greeted me when I arrived at knit group today.

Another Gloria doll - but the size of him. That's a bottle of 'bubbly' he's carrying and on top of his head is a birthday cupcake. He looks ready for a night on the town - or maybe he's returning from one. There is much knitting and much stuffing in that doll. Very impressive, Gloria. 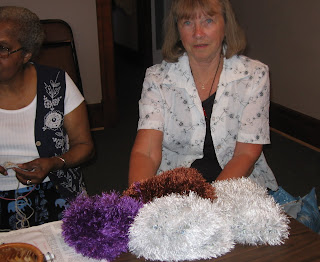 Such a big hit a few years back, novelty yarn is now almost impossible to find. When Marlene discovered the yarn in a village store on a recent day trip she said she bought every ball they had. And has been knitting hats ever since, it would seem.

Sharon is knitting another Top Down For Toddlers sweater. Knit in cream coloured Naturel, 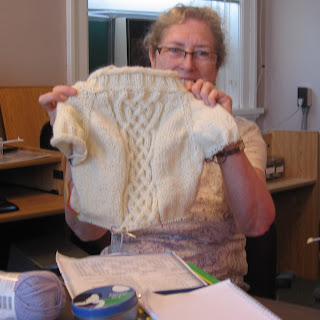 it has a beautiful cable - Sharon's first cable - down the front. 2010 is a learning year for Sharon it seems. Her Olympic project was her first lace project and this little sweater her first cable. Call us 'mature students' but knitters love to learn new techniques.

Since Nicki is knitting the same pattern, she tried to help Bonnie with the placement of the pieces for her little summer top. Looks as if they aren't quite sure. I won't start mine until they figure it out. 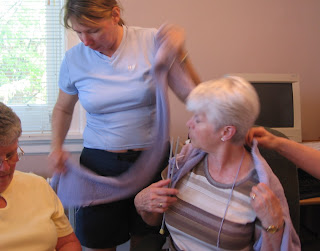 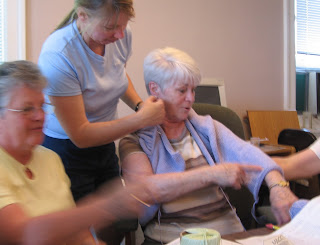 In time for the next Olympics - just kidding - Lois is almost finished the second mitt to match her Olympic hat. She started these mitts just as the winter Olympics finished. 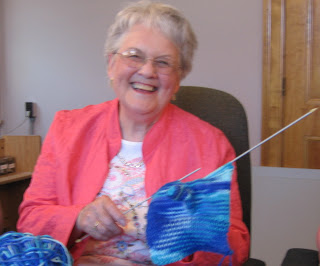 Even Lois thinks that is quite funny.
Posted by Brendaknits at 6:38 PM

I love your knitting group. It always looks like everyone is having a great time, and the projects are beautiful.