Stephen West is the new man in my life.  Yes, he is way too young for me.  Way too handsome, way too creative.    But as a man to love  in a knitterly fashion,  you can't beat Stephen West.

His designs,  to date accessories only and mostly scarfy,  shawly,  neck thingies,  are creative and lovely.  He uses luxury yarns  for wraps that surrounds your neck in ethereal softness.

Last fall at the Kitchener Waterloo Knitters Fair, I succumbed.  One of the booths had several of Stephen's Spectra scarf/shawls made up and on display along with several 'kits' containing yarns and pattern.  It was an eye-catching, crowd-stopping display.  Despite the 'ouch' price tag, I couldn't resist.

But my ill-informed, un-informed opinion, based on appearance only,  that the pattern would be difficult to knit caused my kit to sit on a shelf until  a day when I could devote the time to knit with concentration.  How wrong I was.  Stephen, my new man, has written a pattern of the best kind.  Easily memorized and easily knit.  The pattern  defies  it's true simplicity  with an appearance of complexity that would impress even the narrowest of knitters. Thank you Stephen.

Although mine is barely started, it's beauty is already apparent. 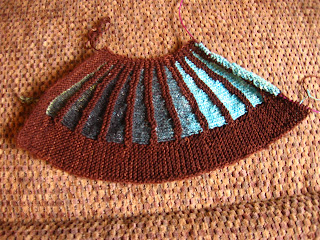 Worked over a mere 40 stitches, with colour progression to keep me motivated,  it is a fast and fun knit.    Have I said "Thank You, Stephen"?
Posted by Brendaknits at 12:02 PM

Nice work, clarifying (with text and convincing photos) that what seems so hard, is in fact possible due to pattern clarity. Thank you for this and other valuable information found in your blog.

That is gorgeous! The dark yarn is malabrigo, correct? Hmm, I have to think what I have in my stash that I could use for this.

Yay - I'm so pleased you've also fallen (in a knitterly way) for Stephen West. I've knitted several of his projects. They always have wonderful outcomes from a relatively simple process. They're also very adaptable. Once you've done one you start thinking about all the different combinations of yarn you can use. My good friend Margarita (1funkyknitwit on ravelry and blog and facebook) test knits for him, so I've just seen his most recently published book of patterns - book 3 - that has some really great hats among other things. You'll soon be addicted!

I keep looking at that pattern thinking it will be difficult. After reading your post I am going to add it to my list.

Very pretty Brenda - and great to know that it might be within the realm of possible-for-me, one day. I had often thought it would be a really tricky pattern.

I love hom too. Luckily, with knitterly love, We can share his talents. I've made two Daybreaks, and I have yarn earmarked for a Chadwick and a Herbivore.