Help! I'm stuck and can't get out! Here are my dining room and kitchen windows at 7am this morning. 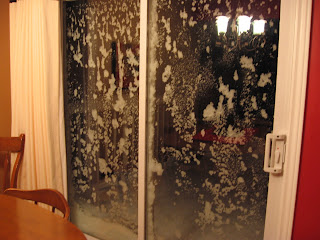 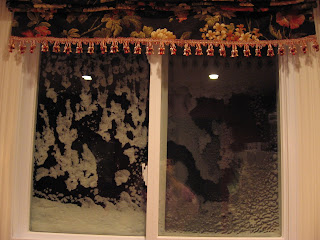 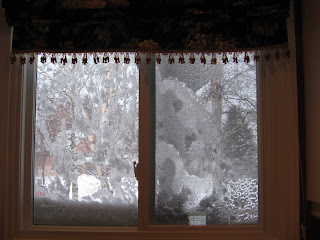 That old Farmers Almanac adage about snow being a good insulator? Those of you with ancestors smart enough to avoid the great white north when they got off the boat might have never heard it, but supposedly snow makes a good insulator. What a bunch of hooey! Our hydro went out at 8pm last night, (That was a miracle in itself. With the high winds we had are having, I was surprised we had hydro that long.) and by 8:30 the house, surrounded by GOBS of snow, had cooled. I went to bed.

There was knitting though. Two sleeves, machine knit. One of them has to be ripped. Having knit the body by hand on a 4mm needle, I suspected that a stitch dial setting of either 4 or 4.5 would do. Rather than do a gauge swatch - they lie anyway - I knit one sleeve at each setting.
I think the 4 is the one I like best, so today - since I can't go anywhere - I'll rip and re-knit the second sleeve at stitch dial 4. 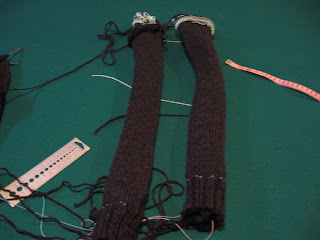 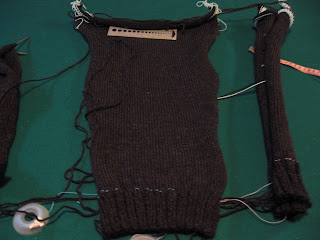 Son Peter emailed, last night, to say Toronto has little to no snow. That's a mere two hours south. Grrrr.
Posted by Brendaknits at 9:26 AM

I'd say you had quite a bit of snow. We had 6" of fluffy stuff last night. Pretty but hate driving in this weather.

I'm in Aurora, and we're somewhere in between the GOBS you have and the NONE Toronto has. Either way, I"m lucky enough to be able to work at home when the weather warrants is. It warrants it this week.

I've just finished shoveling somewhere between an inch and two inches of snow off the driveway for the second time today here in Toronto proper.

Right downtown by the lake could be a whole other story though!

This is going to ruin my Christmas surprise if I read your blog and see my sweater coming to life!!

Yes, you definitely need someone to come shovel you out! Or maybe you could just stay inside for the winter?? That would be some hibernation... and knitting time! We had a huge snowstorm but does that mean I get time off? Noooo. What's wrong with this picture?

I must use my machine more!
One thing I was told when I bought mine was that the LK150 dials would match gauges for hand knitting needles in metric. The little I have used mine that has been the case.