The Genius Of Elizabeth Zimmermann

The other night I reached into the knitting bag for my copy of Charlene Schurch's "Hats On!". I was tired and intended only to look at lovely pictures. But out of the middle of Charlene's book fell EZ's "Knitters Almanac" Ooh! I forgot that I had packed that book.
I turned to the month of June and began to read about the 'Three Hats'. The Ganomy Hat - because it has ear flaps - caught my attention. Most 'ear-flap' hats have the ear flaps knit separately then attached to the hat body.
But EZ, with her bent for mathematical genius, created ear flaps by shaping. Intrigued, I decided to cast on. The hat should be re-named, I think. A better name would be the Ear Flap Surprise Hat. Just like with EZ's Baby Surprise Jacket the Ganomy Hat surprised me with ear flaps created by shaping. What fun.
The top of the hat, though, seemed elongated. When I got to the part that said "insert ping pong ball", I realized no one I knew would be wearing this 'gnome' hat. With my own -albeit limited - knitting genius I re-shaped the top.. Look at this. 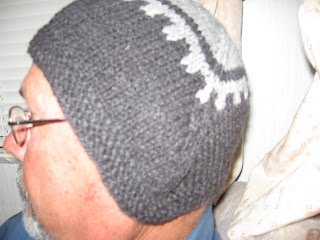 I don't think I'll ever knit an ear-flap hat the 'conventional' way again. I'll post the pattern for my version of EZ's Ganomy Hat tomorrow.
Posted by Brendaknits at 2:58 PM