My  Noro hat is finished.  A fast, fun, weekend  knit.  The directions suggested the hat would require one ball and a bit   of Noro Kureyon.  That estimate could not have been more accurate.   It took just a teeny, tiny bit of ball number two.

Off the head, the hat appears to have an over-zealous curl to the bottom edge. 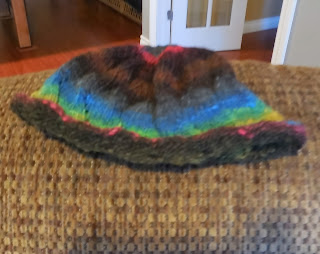 On the head though, it behaves very nicely.  And this, in it's unblocked state. 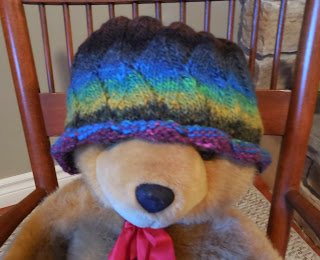 A solution  to the tendency to roll  would require only a minor change to the beginning.  The directions  say to knit one round then begin the pattern.  Instead, maybe one round knit then one round purl.  Or perhaps a few rounds of knit for a more decided roll, then one round purl to stop the curl.  Even so, I am not unleased with mine.

Pattern: Ziggely Zag Hat.  Free on ravelry
Needles:  4.5mm
Yarn: Noro Kureyon - one ball and a very little amount of a second ball.
This worked for me, as I had leftover Kureyo from my Mitered Square Pillow.
It doesn't work so well if you must  buy yarn for the hat.
Mods:  None

This is a nice little hat.  Just enough pattern work to keep it interesting but not so difficult as to torture the knitter.  The type of project I like to call - A Double Feature Hat.  Needles, yarn, two movies and you have a hat.

Posted by Brendaknits at 4:37 PM

Very pretty hat, and it shows off the knitter's skills, that's a winner.

So sweet! I love Noro.