A week from now, I have a ladies event to attend.  A Christmas luncheon and the event requires that we each bring a small gift.  Being a knitter, I think, wouldn't it be a good idea to take a hand knit gift?  Imagine the ooohs and aaahs.  Imagine the compliments.  Imagine the ego boost.  Imagine the stress!

I went searching through my already-knit box.  It is low on FOs.  The only items in it are  the Kitimat hat and mittens. 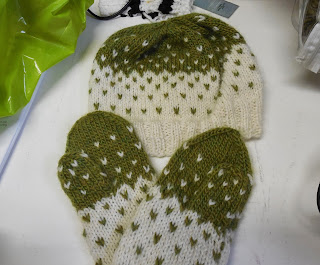 But my gift recipient doesn't strike me as a toque and mittens kind of girl.

There is also this, 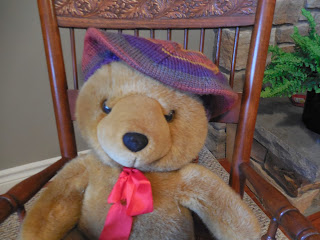 The tam I knit with Classic Elite Liberty, purchased last winter on a yarn crawl to Barrie.
Hmmm.  I can see her in a tam.

And - since the tam took a ball and a bit, there remains  almost an entire ball of   the Classic Elite Liberty. 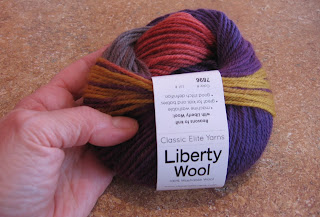 To go with the Tam, maybe a little cowl  - or  cache-cou as my French speaking grand kids  call it.  And an entire weekend to do it in.  Piece of cake.

Except that version one didn't suit.  Nor did version two.  Or three and four for that matter.  Change of plans.  How about fingerless mitts?  Great idea.  Number one is almost done. 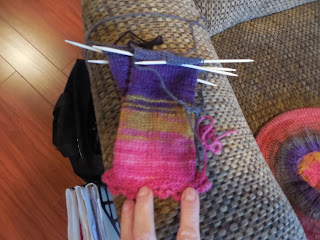 Is there enough yarn for number two?   The next day or two shall tell.  A one-armed,  paper hanger my recipient is not.

Perhaps a tam is enough.  Throw in some chocolates and call it  done.  I'll let you know.

Posted by Brendaknits at 9:39 AM

got a scale? best way to see if you have enough. I alwasy divide my yarn into two equal balls when I have to make a pair of anything.

Oh I love the fingerless mitts! I will hold out hope for those and eagerly await the final verdict!

A tam and chocolates sound good to me :)