The fingers took their tranquilizer and I calmly, determinedly and hopefully knit a swatch. I am a fan of big swatches.  Often, knitters read the gauge on the ball band and cast on just that number of stitches.  But that means you are trying to measure/count curling edge stitches.  Not an easy nor accurate thing to do.

My preference is to make a larger gauge swatch.  Use garter edges to prevent curling and measure off the 4 inches in the centre of the flat-lying portion of the swatch. 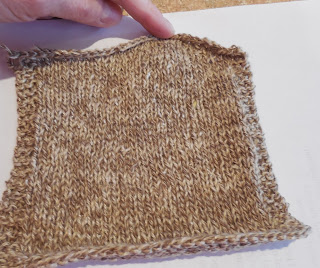 My prescribe gauge was 23 stitches.  Using two strands of the very, fine, brown tweed held together with one stand of the cream-coloured, mixed-fibre yarn, I cast on 36 stitches.  Pre-blocking, the gauge was 22.  Close enough I thought.  But I had a suspicion that this fabric might stretch after blocking - and it did.  Post washing it measured, laid flat, 21, but shaken and fluffed, 20  stitches over 4 inches.  Hmmm.  I settled on 20.5 as my achieved gauge.

What to do.  Should I re-do the swatch using a finer needle?  Well, I could have. But I liked the fabric I had produced with my 4 mm needles, so decided to stick with what I had.  It does mean however, that I must use my by-now, famous-I'm-sure, gauge-changing formula.  My gauge divided by pattern gauge to achieve a factor by which I multiply all stitch counts in the pattern as I come to them.

The observant of you will be asking - What is that bra-like cup at the top of the swatch.  Well, not only can  a swatch give you gauge,  but also, it gives you the opportunity to practice unfamiliar techniques.  What you are looking at is my first ever go-round of German short rows.  The designer uses them, in this pattern,  to create the shoulder slope. This being a top-down design, that slope happens shortly after cast on, in a highly visible location on either side of the neck.  I thought it a good idea to try out those new-to-me short rows before starting the sweater.  Even here, my first go-round, I think those German Short Rows look darn good.  None of the bulk and sometimes little hole that a traditional wrap and turn can produce.

So - prep work done.  Off to start the real thing.

That is going to be a lovely sweater.

Thank you so much for the link to the double stitch short row method!