Last June, while  on a road trip with a group of knitters, I learned a nifty, helpful tip.  One of the stops on our day of yarning was  Philosophers Wool.  Eugene and Anne Bourgeois, gracious hosts, gave us a grand tour and showed us many of their colourful  knits.

Eugene, himself, was knitting a multi-coloured,  'leftovers' sweater with several, small balls of wool.  I didn't recognize it as a sweater, though, because, with a closed bottom, it looked more like a bag.  Puzzled over what the finished item might be, I questioned him.  He assured me it was a sweater.

"But you have sewed together the bottom" I said.

"Yes, he replied.  "It creates a bag to hold my yarn while I knit."

Now isn't that clever! No balls rolling around the floor.  No balls getting lost under cushions or played with by curious animals.  Clever indeed!

It has been that long, though, since I have knit a sweater in the round but at the  moment I have one on my needles. 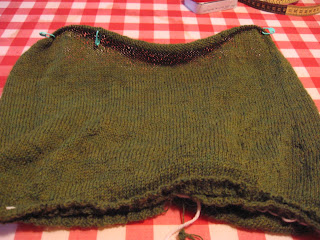 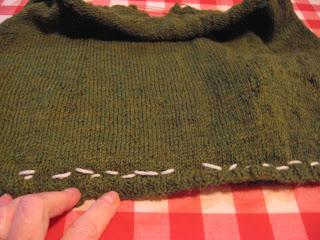 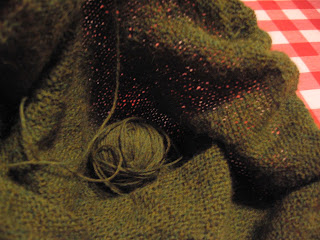 Since this is one of those fine-yarn, large-gauge sweaters where it is so, so, so easy to drop stitches, I have also found that the yarn bag is a god place to store my too-often-needed  crochet hook. 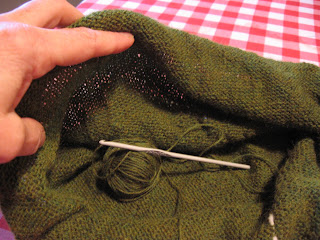 Brilliant! That's going in my bag of tricks...

Slaps self upside of head. Of course!

What a smart idea.