Some relationships are just not meant to be.  Some couples contain fantastic individuals, but together, neither are shown at their best.

Not my niece and her hubby of 10 days.  As far as I know they are still in the bliss period.  I am speaking of Debbie and Sally.

My When Debbie Met Sally sweater, knit using Deb Gemmell's famous, top-down, neckline method and a modification of Sally Melville's Where's The Opaque  pattern just didn't have longevity in it's marital genes.  The sweater, knit especially to wear with my Aunt Of The Bride Dress, didn't compliment the dress at all.  Following that disappointment, I thought I could 'make do' by keeping the sweater as part of my summer, cardi  stash.  But the more I looked at it, the more I realized - it lacked a certain fashion flair.  Actually it had no fashion flair.

A completely, 100%, garter stitch cardi could  accurately be described as appearing 'homemade'.  My knitting goal is always that confirming the garment as homemade should come as a surprise.  A shock.  Total disbelief to be exact.  Instead, When Debbie Met Sally let that secret out at first glance.

Looking at the photos of the sweater, I realized  the attraction, for me,  was colour.  I liked the green and I particularly liked the contrast and summery look of the white buttons against the green. 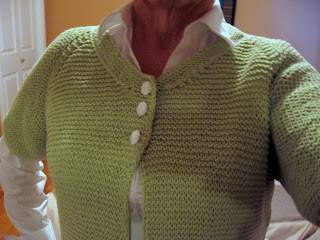 Colour and contrast I could keep but with a different pattern.


Then, in that  'it was meant to be'  category, Chic Knits published it's latest pattern.  Cinne. 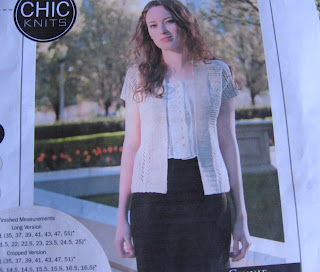 A lacey short-sleeved cardi calling for the exact weight of yarn  used in When Debbie Met Sally. 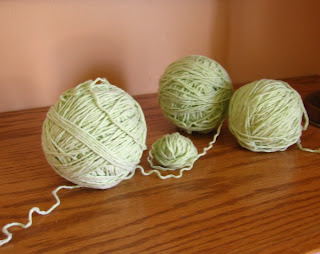 Couples meet and mesh.  The heat of that first-blush passion is upon me and look what I've accomplished so far. 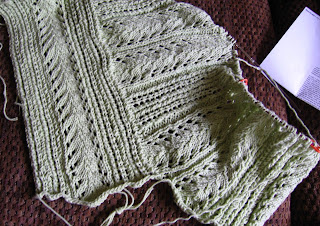 I sense a golden anniversary in this couple's future.
Posted by Brendaknits at 1:49 PM

MUCH better. I loved the green as well, and this is a much better use of it. This will be a long lived union.

I liked the original. It seemed rather Zimmeranish.

It looks like the yarn held up well to the rip.

How brave of you! But if you were uncertain about the original, you wouldn't wear it. This is a good outcome.

NICE summer pattern; congratulations for ripping what dissatisfied you!

Much more stylish! Very interesting construction. I like all of ChicKnits patterns.

Oh dear. It was short but good. I hope the new couple will be happy but I'm sad.