It would seem to me that once burned, twice shy.  But  not Doreen.  She has agreed to knit another project for another friend and this one too is  driving her crazy. 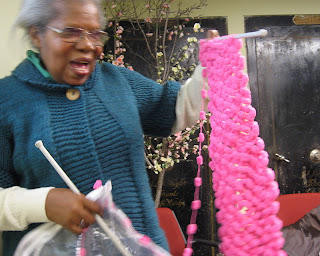 Pom pom yarn - that's what I'm calling it, I don't know the official name  - that is beyond difficult to work with. 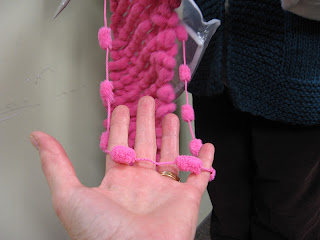 Pulling each pom pom through is a chore in itself, but ripping out?  Impossible.  Ask me how I know.  Ask Nicki how she knows.  Better yet, ask Doreen. We have decided that a little therapy would go a long way to solving your 'S'  word issues, Doreen. 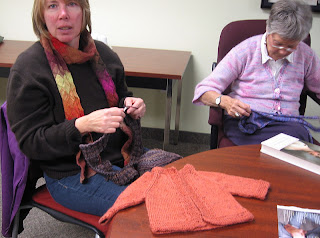 Top Down, no sew from Need A Baby Cardigan?   Is there 'Gramma-wanna-be'  thinking behind these baby sweaters, Nicki?

Past the baby stage, Wilma's little grand daughters love barbie dolls.  So what would a good Grandma knit for Christmas gifts?  Barbie fashions of course.

Is it just me, or is Barbie more  sophisticated than she used to be?  Look at that hair!

Our Koigu queen was wearing a Koigu sweater. 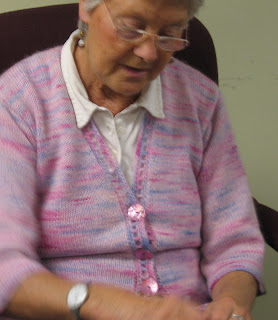 Normally her style leans towards wraps and shawls. We don't often see Ingrid in a sweater.   This one is beautiful  - of course  - and in particular the edging caught my eye. 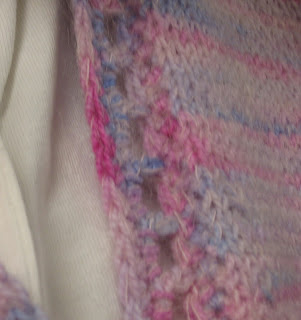 Crocheted, fast and easy said Ingrid with built-in buttonholes.  I think I'd like a lesson on that one.
Another great Thursday afternoon. A keenly-anticipated, weekly time-out as we enter the hectic season.
Posted by Brendaknits at 6:12 PM

Love that crocheted cardigan edge! WOuld Ingrid do a quick tutorial, or at least point us in the direction? Name of the stitch?

I made a whole lot of the pompom scarves last Christmas. You're not supposed to pull the pompoms through, you just knit between them 2-3 sts, just to use up the string, and the pompoms line themselves up just like soldiers. But I'm glad she's not giving up.

Pom pom yarn is a good name for it.
I struggled with it at the beginning but eventually got it and love the pillow I made. It's sooo soft and puffy. Sigrun is right, just knit the string between the pom poms and it goes pretty quickly.

I tried knitting with that pom pom yarn....what a pain! I decided it was not worth my time.

All the ladies have nice projects to show every week!