Tears are not  normal  at knit group.  But today, tears of laughter rolled down my cheeks.  It started with Sandy B.  She relayed the story of  getting a speeding ticket earlier today, when only a few kilometres from home.  124 in an 80 zone.  Yikes Sandy.  Have you never heard of cruise control?

Nicki pointed out that a Grandma in a twin set with pearls isn't likely the common 124-in-an-80-zone culprit.    Luckily for Sandy, the officer wrote the ticket for a reduced speed of 105.  Then proceeded to tell Sandy to go to court and fight it.   Do you suppose she reminded him of his Grandma?

At this point in the story, Ingrid  piped up to give Sandy advice about  what to do in court.  Apparently shortly after Ingrid came to Canada, when her English wasn't  good,  she  was caught driving at a high rate of speed in a 40 K zone.   Ingrid's  officer, even more helpful, told her to go to court to fight the ticket advising her to   'plead guilty to 69.'

Ingrid, in telling us the story,  emphasized her newness to Canada, her inexperience with tickets, judges and courtrooms and her  frustration over not  understanding phrases like 'plead guilty to 69'.   On the established court date, Ingrid was waiting in the  ante room when a  well dressed gentleman approached and began chatting.  Ingrid reported  "He looked like a lawyer.  Very well dressed with nice shoes".

Mr. Well Dressed  asked Ingrid the reason for her court appearance then listened to her story of driving at a high speed in a 40 zone and being  counselled   to appear in court and to 'plead guilty to 69'.   "That's right", said the gentleman.  "Plead guilty to 69."   Then he walked away with no explanation.  Ingrid still didn't know the meaning, but she knew what to say.  She was ready.

Ingrid happened to be last in the  line of speeders the judge saw that day.  No one else 'pleaded guilty to 69'  and Ingrid began to wonder if she had correctly understood the advice given to her.   When it was Ingrid's turn and the judge asked about her driving, she thought he was asking about her drive to the courthouse that day.  "Oh, it was lovely" said Ingrid. "Beautiful clouds and a very  pleasant drive."

The judge corrected her and asked about the drive when caught speeding. "Oh" said Ingrid. "  I plead guilty to 69".

"$40"  said the judge and it was over faster than it began with   Ingrid still no wiser about the meaning of 'plead guilty to 69".

By this point in the story, Doreen  bust forth with uncontrollable laughter, announcing  her   'low' thoughts and racy interpretation of  'plead guilty to 69'.  At which point we all admitted to  the same thoughts and loud laughter erupted through the room.  Ingrid's English is still not good enough for racy slang and as we all laughed, she puzzled.  Tears ran down my face and my photo shoot was blurred.

My one good shot is of Gail  and  the lovely gift she received this week.  An Aunt gave Gail  her Mother's first thimble in it's original tiny case.  Such a wonderful treasure to have. 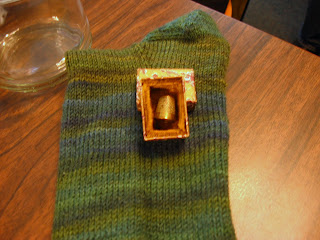 Posted by Brendaknits at 8:11 PM

Too funny! It reminded me of when I got a speeding ticket. I'll have to post about it and how I got out of it.

Dear Brenda, that was so worth the coffee all over my desk. Its just a darn good thing that my laptop sits far back on my desk!

I totally think this is secret code between the police and the judges. I think it means:

"Yeah, I pulled her over, and yeah, she was speeding, but geez--look at her! If I'd known she was a lovely lady-of-a-certain-age, in a twinset with pearls :), I'd have let her go by. So, just fine her the minimum, okay?"