Some say 'third time's the charm'.  In fact, many times, my own knitting re-takes have caused me to say it.  But Peasy defied the three-times-lucky rule.  I lost count of the number of re-knits for the front borders.  Towards the end, I thought the sweater was ruined because of the large holes created along the front from the many knits and re-knits.

But, channeling  - and probably paraphrasing - Winston Churchill -' we shall never, ever give up'   or my Mother - 'try again, dear'  I kept at it and think I have conquered the curling edges.  Not with three or even five rows of garter. Not with reverse  stockinet trim,  nor with I-Cord.  I have conquered it with my own version of    ??   trim.

I began by picking up stitches all around the sweater edge, including the neckline.  This doesn't sound like innovation unless you know that the pattern suggested  the  neck trim  be worked  only from where the lace portion ended.  That meant, of course, that somehow you had to sew the finished, prescribed garter edge to the lace edge in the highly-visible, centre front of the sweater and make it look good.

Yes, it is true that the lace portion began with garter edging, but a cast on edge looks vastly different than a cast  off edge and the pattern made no suggestions for a cast on that might  mimic the cast off.
Sally Melville would have been shocked.

So what did I do?  After picking up stitches along the right front, around the neck, and down the left front, I purled the next row.   My theory being that when turning a piece of knitting, a purl row makes the turn sharper.  And my front edges definitely needed to  be turned.  Away from the  inside of the sweater and towards the outside.   The next three rows, I worked as a  garter edge of sorts but by purling rather than knitting.   I added stitches on the convex corners and worked two together in the concave corners.  Lastly I cast off by purling.

Peasy is blocking now and of course within those strict confines, it is difficult to tell.  Before blocking, though, I tried it on.  I laid it over a chair back.  And DANG!!! I think I've got it. 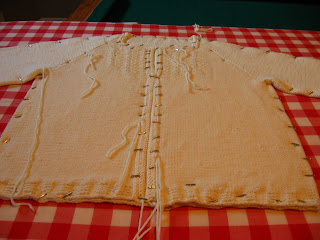 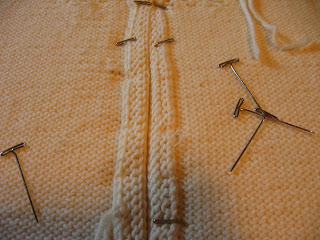 Is there a name for garter edging  in purl stitch?  I don't think I've ever encountered it in my knitting life.  I ask because if it doesn't have an official name, I think 'Brenda's Edge' has a nice ring to it.
Posted by Brendaknits at 8:39 AM

It's YOURS! And looking good!

I like it. Ands you deserve it, after everything you went through to ensure it worked.

The garter stitch edge in my "Perth Cardi" is done in purl. It just worked out that way due to the pattern stitch I used.