Today at knit group we had our Olympic medal presentation ceremony. Here's me, medals ready. 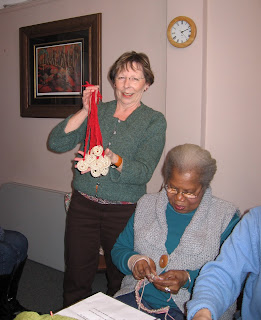 I present to you, the Gold Medal Winners of the 2010 Meaford Olympic Knitting Challenge.

Wow! Look at those smiles! It would be a toss-up, I think, to know if they are smiling because of their medals or because they are done with all that high-pressure knitting. Two knitters reported being questioned by their doctors about sudden spikes in their blood pressure. Knitting is supposed to be relaxing!

The two ladies sitting next to me come regularly to Knit Group from Community Living Meaford. They were our support team, always offering words of encouragement. That earned them the red medals.

Our celebration actually began Wednesday night. Riverside Yarns in Owen Sound hosted a post-Olympic party - a time for show and tell. Not to mention a generous draw for gift certificates. Our own Sharon, wearing her lovely Branching Out Olympic Scarf, was one of the lucky winners.

At the party we saw the Fish Hat from Knitty.com. 'Hello. Who's in there?' Isn't that fun?

On to Survivor and some quiet, relaxed, no-pressure knitting. After starting out so cohesively, the Survivor participants are falling apart. Initially, it seemed their Tribe names gave them a sense of commonality, but it didn't take long for that to disappear. Randy gone, with one vote to Boston Rob. Russ is good at mind games.
Posted by Brendaknits at 7:05 PM

Neat medals for such productive knitters! Was fun connecting with the Meaford group again at Riverside yarns last Wednesday for our knitting Olympics wrap up!

We'll have to get together again soon. Maybe some nice spring day we can meet up in Owen Sound, descend on Colleen en masse for a bit of yarn shopping or browsing...and then go for a knitting lunch somewhere. Harrison Park is nice except that it has pretty noisy acoustics, not great for a group chat. No doubt someone knows a perfect location.