Gold Medals Are No Guarantee

Despite having won a gold medal in the Meaford Knitting Olympics, this weekend, I learned that my medal is no guarantee that I perform as coached.

Tidying up the yarn room, I picked up the pattern for my Olympic Knitting project - Elizabeth Zimmermann's Green Sweater. Ready to file it away until next time, I saw this. Number 6. 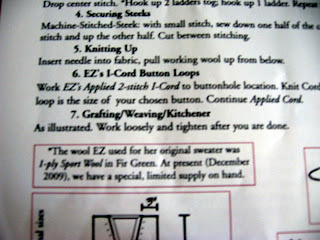 "What the heck?"I thought. Why would there be information about I-Cord button loops in a pattern that has no I-Cord?

But there it was - in both picture and word. 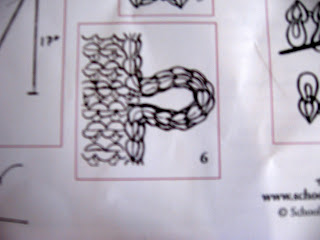 Well, perhaps I should re-read the pattern. Sure enough, Elizabeth meant for the fronts to be bordered by applied I-Cord with built-in button loops.

Where the heck I ever got the idea that the buttonholes were to be crocheted, I do not know.
Normally my prevailing knitting philosophy is 'sometimes good enough is good enough', but something about recreating this historic sweater made me want to knit it exactly as directed.

So, this weekend, two weeks after the closing ceremonies of the 2010 Olympics, I cut off the crocheted buttonholes and worked the applied I-Cord. I must say the I-Cord gives the sweater fronts and the button loops some substance. In this loosely knit sweater, substance at those edges is a good thing. My Olympic project is now done.

I'm keeping my medal, though.
Posted by Brendaknits at 10:46 AM

Not that knitting is in any way a competition but Ms Harris your dedication to perfection makes it awfully hard for the rest of us to call ourselves knitters!

I don't think I would ever have gone to the additional trouble of revisiting a knit I'd already worn...but how fabulous that you did! It really does justice to your year with EZ!

You say it adds structure - how does it look? Are you happier with the appearance?