Off The island - Almost

If not off the island, at least moving closer to the mainland. 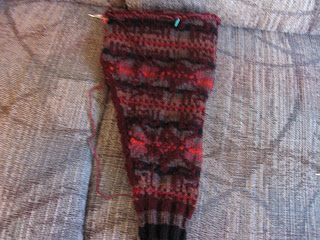 the second one started. 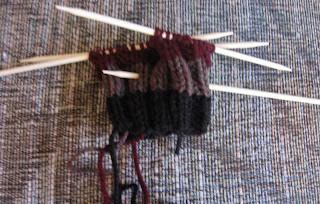 After the Olympics, when I returned to the Waterloo Fair Isle, I picked up the called-for, 5 mm needles and started in where I had left off. After an inch or so of knitting, I took a good look at the stitches and it seemed to me that the post-Olympic stitches were bigger than the pre-Olympic stitches. With my memory, I will never know for sure but it appears that I might have forgotten to switch up to the larger needle size after completing the ribbing.

And I am here to tell you that it is going to stay that way. Sleeve number two will have to be done the same way. Today, I will begin the fair isle portion of the second sleeve on the 4 mm and see if it resembles sleeve number one. If not, then I have no idea what I did and Waterloo will have sleeves with disparate DNA. And I will love it all the more for it's uniqueness.
Posted by Brendaknits at 10:04 AM

That attitude works for me.

I didn't realize the sleeves weren't picked up and knit down! Interesting! And gorgeous.

In software development they say "Call it a feature and ship it!"