Back home means back to knit group on a Thursday afternoon.  And other than being on vacation where someone ELSE vacuums my room, makes my bed and prepares my meals, there is no place I'd rather be on Thursdays.

With the bright, background  appearance of these pictures, one would think the sky was sunny today.  But the only place that was sunny was the upper room at the Meaford library with the knitters.

Our returning snowbirds, Sandy B and Carol  looked tan and fit after a winter in Florida and had some interesting knitting.

Sandy  knit sleeper jammies for a little one. 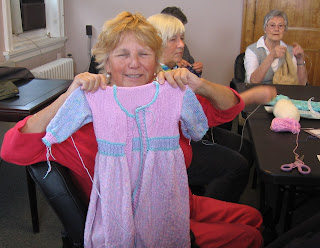 I think she said something about having had the yarn for 20 years.  That's stash busting.

Carol has the coolest idea for little girls' socks.   Fuzzy Tops, I'd call them. 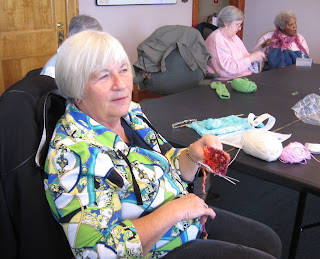 Despite the poor shot of the sock, just know that it is CUTE!  Using  fuzzy, novelty yarn for the cuff and casting on 36 stitches, she is making short socks.  No leg other than the cuff.  The cuff is knit in the fuzzy yarn, while the rest of the sock is  knit with regular sock yarn.  Cute as can be for a little girl.

Doreen has finally finished the Lopi sweater she offered  was coerced into finishing for her friend. 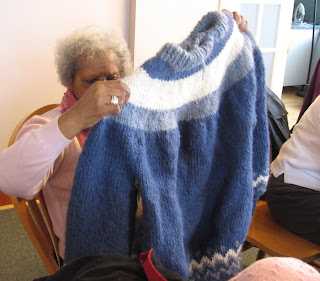 I told her not to offer to do another.  Otherwise that 'L' won't stand for Lopi.


Elizabeth Zimmermann is the only other knitter I ever heard of who re-soled hand knit socks.  But look.  Jean does too. 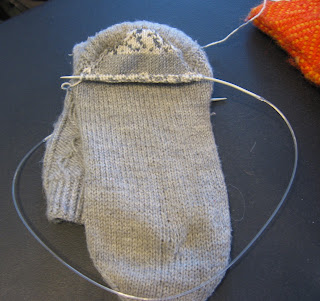 She starts at the heel with a few stitches, increases on each row until desired width, while at the same time, picking up one side stitch of the existing sole. 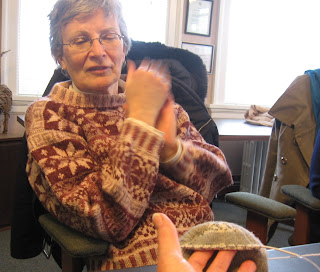 Wilma has had Leaflet in her queue for a long time. 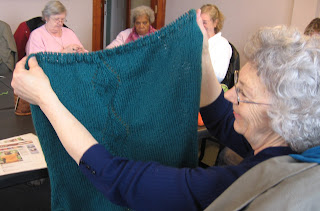 Finally she found some Cascade Eco in a colour she loves and Leaflet is well on it's way.  She intends to lengthen the sleeves for a more versatile garment.

Gail is knitting this  pattern for a grand daughter. 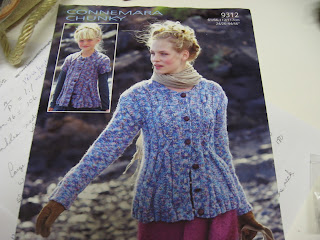 I have always liked this pattern - ever since our very own Wilma knit it up for a store sample at Purrsonally Yours,  Meaford's LYS.  I like the  increased width between cables at the hips.  Right where women of a certain age need extra width.  A younger lady would appreciate the swing that extra width gives,  so you have a pattern for al ages.  Gail  says with two grand daughters of a fashion-conscious age, she will have to knit two of these sweaters.  Seen here with two sleeves almost complete, it won't take her long. 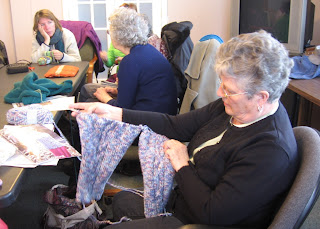 Two weeks ago Thursday, I was here. 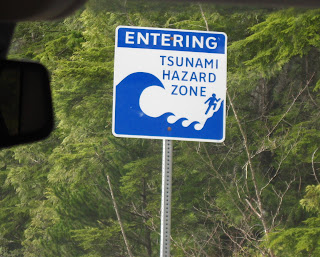 This Thursday, the only hazard was the occasional stray needle.  Fair exchange, I'd say.

Posted by Brendaknits at 8:45 PM

Labels: Thursdays Are For Knit Group 2013

Welcome back! You were missed!