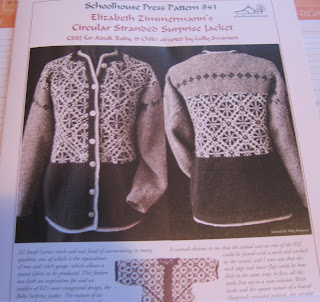 I first saw the Stranded Surprise Jacket on ravelry - in both adult and child sizes.  I was captivated.

I saw colour work.  And a second look had me saying the "Oh Yea.  This version is not garter stitch." I was  Captivated.  A must-have pattern for me that just might take the rude approach and jump the queue.

The adaptation from Elizabeth's garter stitch version was done by her grand son Cully.  Meg Swansen's son.  Isn't that every knitter's dream?  Not only a daughter following in your footsteps but a grand son as well?

Cully goes on to explain how he and Meg played with the square feature to enable the pattern to evolve into a design that could be knit in stranded, stockinette stitch.  He says
'Meg Swansen discovered that the use of a square, diagonal colour pattern in Stocking stitch will produce a fabric with equal stitch and row gauge.  I was inspired - why not apply this to EZ's Surprise jacket?  It seemed obvious to me that the initial cast-on row of the BSJ could be joined with a steek and worked in the round, and I soon saw that the neck edge and lower flap could be handled in the same way.  ......  With steeks and the square nature of a biased ( diagonal) stranded pattern, the circular adaptation of the BSJ can retain the shape, construction, and mystery of the Garter stitch version." I quote you all that , not so  that you will instantly understand what he says,  or  what he has done or how he constructs the CSSJ, but rather that you will see the genius he possesses.  The acorn doesn't fall far from the tree.  He has  his Grandmother's genius in spades.  Three generations.  Knitters are blessed to have been and to be, still, led by such people.  Thanks, Cully.

Posted by Brendaknits at 7:52 AM

Great. Now I have to buy another pattern - bacasue that sweater is just STUNNING!!!

I have this on my covet list. I can't wait to see what you do with it!

I have yet to make any of EZ's patterns. I really want to :)