April 12, yet freezing rain and ice make the day seem more like one in  March than April.  Sane  people  stay indoors.  Me, I had plans to visit my Dad.  In all, with our B.C. vacation  plus previous commitments, it has been several weeks since I have seen Dad.   I planned on being down to his retirement home in time for lunch.

After 3 hours of driving during which I encountered closed roads, hydro poles broken in half with downed hydro wires being guarded by police, and roads so buried under ice as to be invisible, I arrived - safely, thank goodness - back home.

This is a day to knit, not to drive.  Perhaps I will work on the second sock of the travelling sock pair. 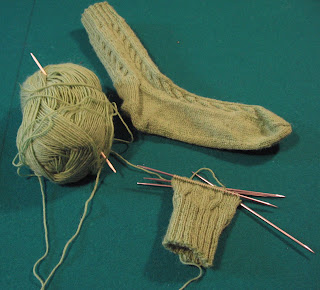 Or maybe I will surf ravelry to find inspiration for the yarn I purchased at  the Beehive Woolshop in Victoria B.C. 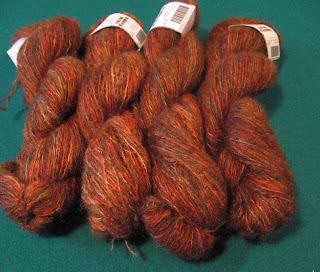 Posted by Brendaknits at 1:47 PM

Amen to that! 'Glad to hear you made it back safely!

Oh that last one makes me want to jump up and go me, me. Pick me! Is that from Punta yarns? If so, you will love working with it. Great stuff.