I am surrounded by UFOs.  Vignette - remind me next time that I hate knitting a sweater in pieces - languishes on my craft table. 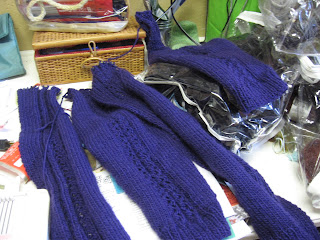 It is, you might remember, my sweater of modification.  The back - I am knitting on the machine - a major modification.  I got as far as the armholes  the other day and have not had time to return to it since. 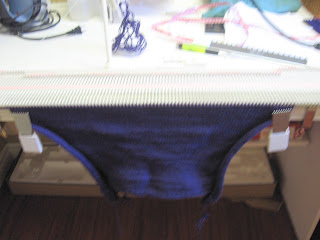 Sally Melville is a great advocate of not knitting in the round.  She said in one of her blog posts that when knitting in pieces, once you have finished a front if you realize it doesnt' fit, it is not a major thing to re-knit that one piece.  But I find it difficult to know if that one piece will fit.  What am I to do?  Pin one quarter of the sweater to my Duct Tape Diva? 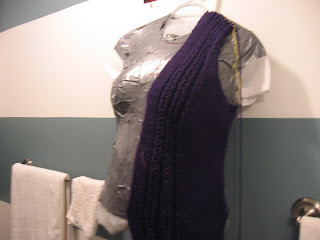 Oh!  Maybe that does work.


Then there is my Nifty Shades Of Grey.  Being an intellectual property thief, stealing the idea from the picture on ravelry instead of purchasing the pattern, I worked merrily and quickly away and finished it last week.  But the ends flared.  Badly.  The vertical garter stitch sections were wider than my horizontal stitch sections.  Yes I know, garter stitch is square.  My issue was I got lazy and didn't knit enough horizontal rows.  That would have been a relatively easy fix had I noticed it earlier.  But by the time I decided I couldn't block it into submission, I had already woven in the ends.  And as I have mentioned on previous posts, I am a dang good, weaver in of ends.  Nifty and I have spent several hours together this week, trying to un-assemble the original version to be able to re-knit it. 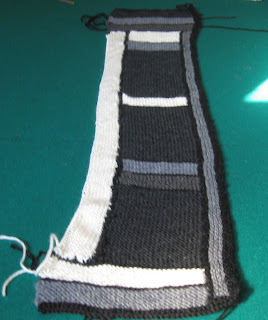 In the meantime, frustrated and needing something mindless to knit, I started a scarf for Fred.  Feeling generous and loving towards a man celebrating his 70th birthday, I told him I would knit his scarf with  Quiviut.  I had won a ball, last year,  in a blog contest.  Brown in colour,  softer than soft and warmer than warm, I thought it would be perfect.  Once started, though, I realized how delicately gossamer in nature was the Quiviut fibre.  Much more suited to a woman's fine fingers than a man's rough and tumble touch.  I switched out the Quiviut for Kroy sock yarn for Fred's scarf and have saved the Quiviut for a  scarf  for me. 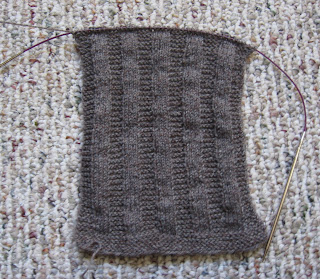 Considerate of me, don't you think?  This way there won't be any friction between us should he put a hole in his scarf.

A busy weekend of social obligations awaits me, so my knitting projects might be just as finished/unfinished on Monday as they are today.  Nonetheless, have a great weekend, and thanks for reading.
Posted by Brendaknits at 10:46 AM

Reading this blog post, It was like looking in my project closet (one of the perks?) of empty nest syndromw--you can have a project closet. These are great UFO's and are certainly worthy of attention. Looking forward to the finished projects.