Waterloo is done. I couldn't be more pleased.

My Waterloo is a sweater based on Anne Williamson's design for Waterloo County Fairisle in Knits From the North Country. I loved the colour choices and fairisle motifs of Anne's pullover, but not her knit-in-pieces method. By combining the best of Anne's sweater with my year of knitting with EZ, I created my own Waterloo Fairisle cardigan.

I took the motif from Anne's sweater, and knit it in the round using steeks to create the centre front and the armholes. I also simply cut away the neckline opening, dressmaker style. These methods - IF I had ever thought of them - would have been too scary to try prior to studying Elizabeth Zimmermann. Now, however, I am a convert. A born-again steeker, so to speak. With no purl rows, the knitting is faster and in my case, more even. With no decreases, the neck opening is neater and the picking up of stitches for the ribbing much easier.

My Waterloo, like Anne's, is knit with Briggs & Little Heritage, on 5 mm needles. The neckline and front band ribbing were knit on 4mm. The bottom ribbing - because I didn't want it to pull in - was knit on 5 mm needles with the total number of body stitches. The total number of body stitches BTW were simply my desired width times my gauge of stitches per inch.

I ignored the 'start here-stop there', sizing details on Anne's motif and simply knit the entire motif. Sizing my sweater to exactly the width I wanted was a bit of a problem. Multiples of that 28 stitch motif had to create my desired sweater width. Sometimes motifs lend themselves to the addition of a few stitches somewhere within the motif, to slightly increase the finished size. But with this one, and despite knitting a substantial swatch, adjusting the motif defied me. Until the sweater was complete, that is. Now, I can see where this might have been easy to do.

With all that steeking there were some raw edges inside the sweater. Some black, gross-grain ribbon and they have been neatly covered. 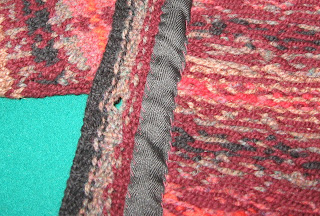 There are a couple of designer touches, dreamt up by yours truly, that I think significantly add to the sweater. One is the row of garter stitch at both the top and bottom of the neckline ribbing. I chose my favourite, and most personally flattering, of the sweater colours for this bit of trim. The buttons are lovely. Maroon - just like the sweater - but with an iridescent quality that picks up the grey-ish tones of the 'Brown Heather' yarn. 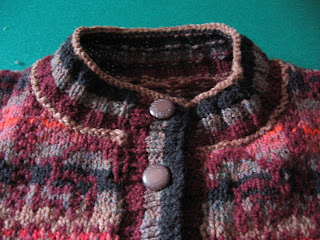 The other designer touch concerns the button bands. They are three colours wide and it was my intention to sew the buttons in the middle of the middle colour to correspond to the buttonhole placement. But I saw that by placing the buttons just a smidge off centre, 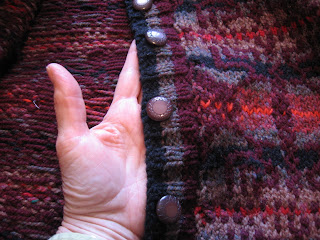 the maroon colour would be revealed on both the button and the buttonhole side. This makes it appear as a designer-intended column of maroon stitches travelling up both sides of the buttons. How 'haute' is that? 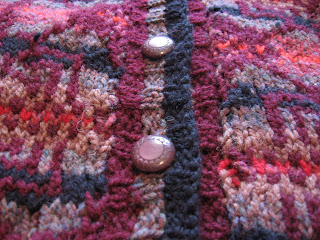 It is a wonderful sweater. 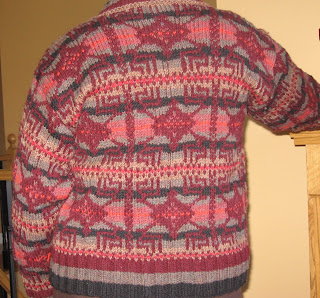 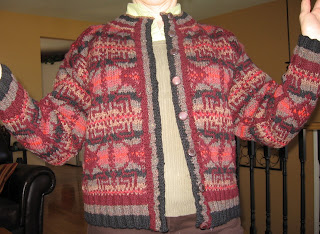 and despite borrowing the motif, is truly mine.

Thanks for staying attentive during the months it took to knit this.
Posted by Brendaknits at 10:59 AM

My jaw is scraping my keyboard...brava, standing O, cheers and whistles on your accomplishment!!! Waterloo is truly a work of art.

Oh Brenda its fabulous in every way! My favourite part is the fit at the hips - perfection achieved by using that larger needle and love love love the designer button centering detail! Congratulations!

not only do you have a really perfect sweater (which you do), you have the record of how you truly MADE it. You knit it, designed it, and took the time to add all those persoanl touches that make it truly unique. Well done!

Yippeeeee!!! Kudos! Not just on the beautiful knit but on climbing that mountain, the learning of all those new techniques.

I'll bet you're already scoping out the next mountain...

Brenda, this is a spectacular sweater. One of my favourites from this book. Congratulations on the victory!

I absolutely agree with you about EZ. Takes you places you wouldn't have gone otherwise.

Brenda, that sweater looks great, I'm looking forward to seeing it in person. You really have raised the knitting bar.