Being spring, when everything is greening up for the new season, it seems appropriate that I finished this long-suffering, green shawl (oh, it's me - the knitter - that is long-suffering, not the shawl) in time to wear this season. 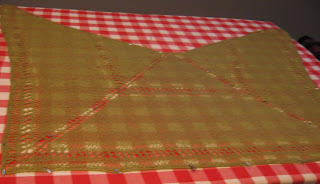 Wilma and I both purchased these shawl kits at the Waterloo Knitters Fair last September. It was only days later - as in a couple of rows later - when we both realized that we were probably beaten. Very,very fine, lace-weight, alpaca yarn coupled with a pattern that was written by the shop owner herself. Sadly, her first language was not English and the pattern lost something in the translation.

Wilma gave up. Instead, she took the pattern and used sock yarn - tons heavier than our kit yarn - thinking she might be able to figure out the instructions. Only days later - as in a couple of rows later - she gave that up too and knit a lovely, sock yarn shawl of a different pattern. The Weavers Shawl, I believe.

Me, however, I decided not to let the *^%* think get the best of me and I persevered. I knit on it only once a week, at knit group, because most of it is stockinet stitch and I could handle that while chatting and taking pictures at the same time. The two bands of Dropped Stitches and Yarn Overs, I did in my isolation cell at home. 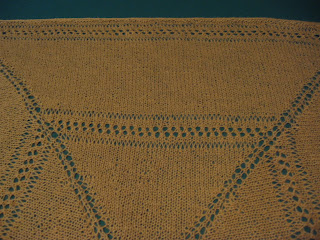 To add injury to insult, the pattern calls for 6 inches of stockinet between the two decorative bands. Before I realized it, I had 7 inches. Be darned if I was going to take it out. As a result, I knit to a breath-holding finish being certain I would run out of yarn. In fact, I had to cheat on the garter stitch border by two rows in order to have enough yarn. Despite the language barrier, this part of the pattern is clear. When it said 6 inches, it meant 6 inches. 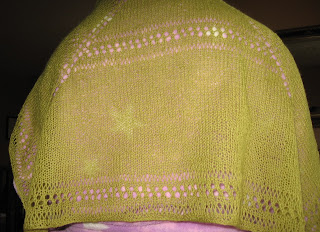 and except for blog readers, the world is none the wiser. Unless, that is, I launch into a tirade of complaints about how hard it was to knit every time someone shows interest in the shawl. It's quite conceivable that I might just do that.
Posted by Brendaknits at 8:18 AM

Big props to you for persevering! I really like the pattern - too bad it was such a bear to knit.

You sure are brave. I would have chucked the whole thing and wrote it off as a bad experience. Good for you; something to be proud of.

'Nothing like Spring green borne from the miseries of Winter! Enjoy your accomplishment!

Its really lovely. But I won't say more than that. Its time to enjoy wearing it, not relive the knitting!

You absolutely may knit my sweater and if some day we end up wearing them in the same place at the same time, I'd be just delighted!

I admire your perseverance!