It felt great to have a finished object at knit group today. Nicki took my picture 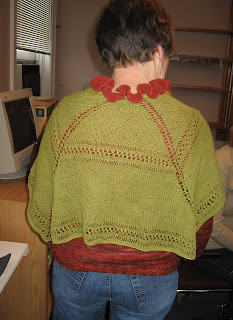 so you could see the Alpaca Shawl over something more suitable than the housecoat I was wearing when I posted about it earlier this week. It received rave reviews, but of course all the knitters have been watching it's progress over the last several months and are probably as pleased as I am to see the end of it have it finished.

Trying to capture the view of the shawl front, Nicki took this photo. I opened my mouth just as she snapped the picture so she took a second shot in which I purposely kept my mouth closed. But in the end, Nicki, I'm using this one. The open-mouth look is more me.

Gail is knitting this sweater 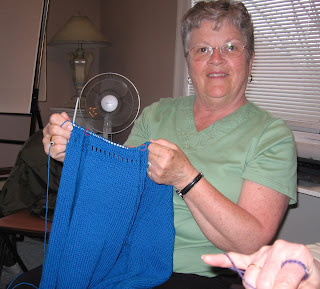 from Knitty. Wilma knit the same sweater about a year ago. Now, Gail too, will have one in her summer wardrobe in this wonderful, rich shade of blue. Nicki was interested in her work it would appear. 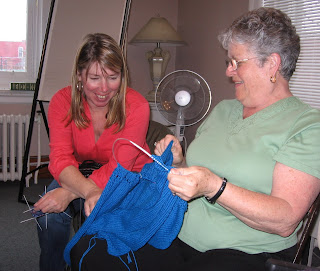 Ingrid was wearing another stunning, Kiogu creation. - This too interested Nicki. 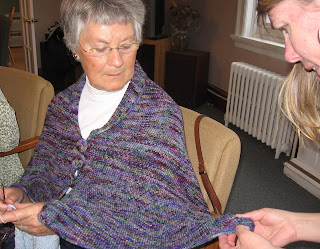 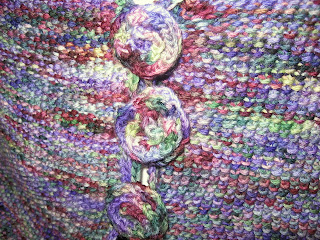 In case you think Ingrid fabulously rich to always knit with Koigu, you should know that the Koigu farm is not far from Meaford. Ingrid visits there often to take advantage of their deals on 'seconds'. Which works well for Ingrid as nothing is a 'second' in her hands.

Pat had another stuffed toy. A 'Bobby'. 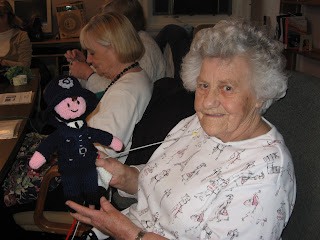 She told me a Bobby at knit group meant I had to behave. Words that naturally fell on deaf ears.

Did you notice that Nicki featured prominently in today's post? That is because today is Nicki's birthday. A very BIG birthday. She looks much younger than the BIG birthday would suggest.

Now off to watch Survivor. Survivor without Boston Rob. Hard to imagine. How disappointing if Russell is right and he is the best player to ever play the game.
Posted by Brendaknits at 6:34 PM

I'm posting just as Survivor is starting - I miss Rob already, and really want to see Russell go down.

Thank-you Brenda. I had a terrific day! Hope everyone has as good a birthday as I had this year! It's wonderful to have good friends and family.

I still like that shawl...and really like the sweater with the cute ruffled neck you're wearing. Happy birthday Nicki!!!