Thursdays are For Knit Group And Survivor

Sometimes knitters buy yarn and begin knitting it right away. Other times, it takes awhile. Today, Bonnie started a little summer sweater with yarn she purchased a year ago. 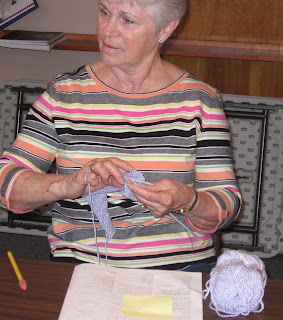 In April 2009, hearing there was a lively bunch of knitters in Southampton, our group travelled over to visit them. While there, Bonnie purchased several balls of Katrina in a lovely shade of Lilac - and has been waiting for a pattern to catch her eye ever since. A mere year later, she spotted this pattern. 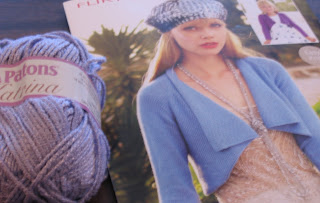 Turns out Bonnie has great taste. Both Nicki and I have also recently purchased that pattern. Mine is probably more than a year away from being knit making Bonnie a speedster. 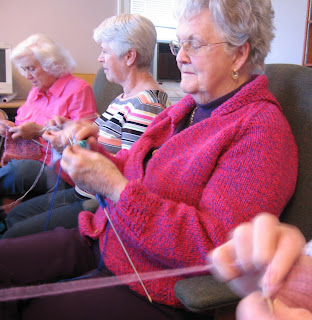 Since it took Lois most of eight months to complete a baby sweater & hat combo, I was pretty sure she hadn't knit it. The story behind it, she said, was that a friend had knit so many sweaters this winter she had no need of more and was complaining that her hands were idle. Lois asked her "Would you knit one for me"? And voila! Lois has a new sweater. Nice to have friends like that.

Nicki took a course on toe-up socks at Riverside Yarns. The cast-on, she said, took 'forever' to learn. 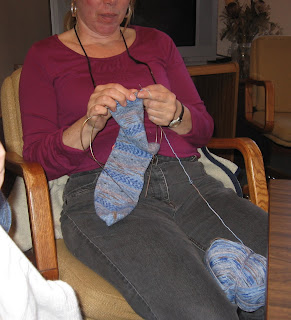 Looks like she has it mastered now. And on two circs, no less.

Now off to see Survivor. JT gone la st week. And Russell thinks there is no 'girl's alliance.'. Maybe not but mostly girls left. Hmmm.

I love this pattern too. We have it and the Flirt at the southside store. I work there on Sudnay. hmmmmmm