Running into the grocery store for a couple of items before heading off to knit group, I was stopped by Berle. Beryle used to come to knit group and I told her how much we missed her.
"But I haven't progressed." she moaned. " I'm still on scarves."

At knit group, I told the gang what Beryle had said. Sandy (Not my face in the picture, just the scarf, Sandy) wanted me to post her as-yet-unfinished scarf. 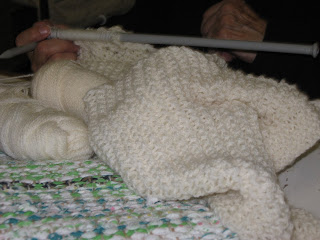 Come back, Beryle. You are not the only one knitting scarves.


Ingrid has another fabulous creation on the go. A dress, this time. 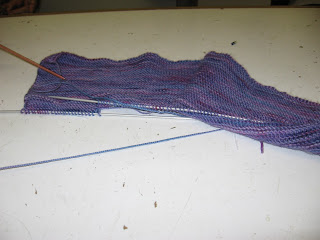 This piece, to quote Ingrid, is one half of one sleeve. The dress itself will be mitred squares. 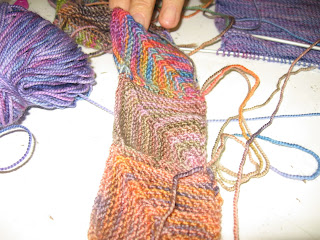 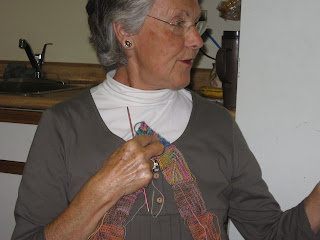 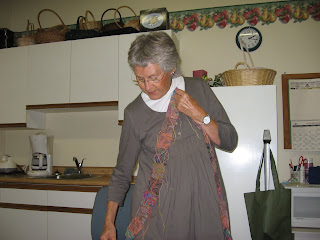 but none of us yet have the vision. Nonetheless, it will be glorious, I'm sure.

Nell, is crocheting a baby blanket. One made of strips. 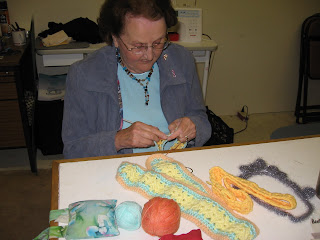 Isn't this called 'Mile A Minute Afghan'? If so, the namer must have seen Nell crochet.

Now of to watch Survivor. Mr. Nasty is still there. But he did have to acquiesce a bit last week. Will he survive this week?
Posted by Brendaknits at 7:36 PM

Are you still meeting at the LYS?