Loden Mist - or at least one sleeve of LM went to knit group today. I showed it off but didn't knit on it at all. When I knit it, I can't look up. The yarn is so fine, I can't feel it with my fingers, so have to look at it constantly. Sometimes, a knitters fingers might hurt from too much knitting. Or perhaps their wrists or shoulders. But with LM, my eyes get tired. That's a first.
So my knit group knitting was still the mystery hat. Well - hats. Plural. There will be four of them. All the same. All will be revealed in time.

And look at what the other knitters are doing. Sandy of the Easy Peasy Wraps (she's on to number three now) spent her knit group time seaming a little tiny baby sweater with mattress stitch. 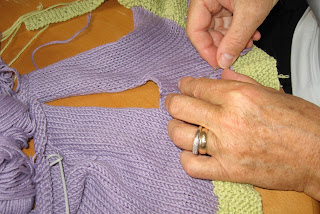 Sharon was knitting a baby sweater too. Isn't that lovely wool? 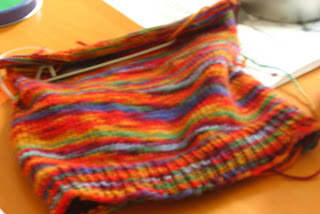 And Doreen showed off her hat. She calls it her in-between hat. Because when she tired of knitting her socks, she worked on the hat. 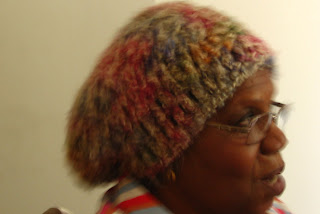 Some people are hat people and some are not. But Doreen definitely is a hat person. Looks lovely, Doreen.

Thursdays are for knit group - but when the heck is Survivor going to start?
Posted by Brendaknits at 6:40 PM