Thursdays are For Knit Group

Kicked out of the actors lounge because it was being used by performers preparing for tonight's show, the knitters were placed in the art gallery.  Perfect place if you ask me, for a fabulous group of fibre artists.

Carol has started her Whisper. 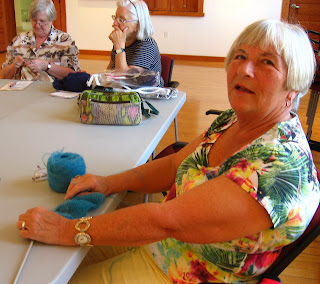 Such a brilliant turquoise.  Carol anticipates wearing it over white capris and top.  Won't that be stunning?

Wilma looks pretty stunning too in her finished, lilac Gemini. 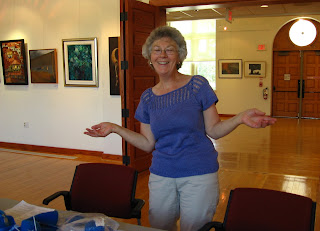 A great advertisement for that pattern, Wilma.  I bet she wears it  to the baby shower she is attending this weekend.  It  matches this baby blanket she crocheted as her gift for the Mother-To-Be. 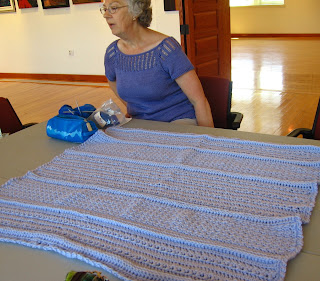 Beautiful work  - and - all yarns from stash.

Doreen  has mastered those mitred squares.

She has set aside this practise piece and  is well on her way to finishing the mitred square scarf. 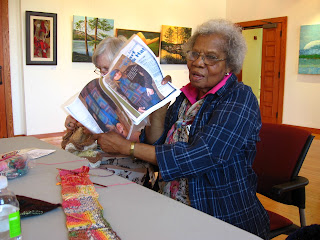 Gloria is back.  Away all winter and then she had the nerve to take off for a week in Vegas.  I teased her about still working on the same blanket as before her trip. 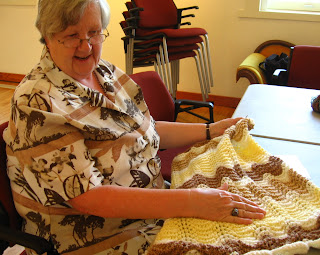 See where she has placed her hand. She was quick to inform me she was only that far before Vegas.  All the rest is 'new' knitting.  OK, Gloria.  My mistake.

Nicki and Wilma are fiercely focused on socks.  Nicki's sock.  I bet there will be more log-cabin, sock- yarn squares in Nicki's life, soon. 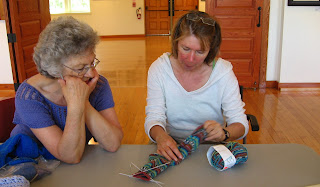 Next week, June 9 - 17, is World Wide Knit In Public week.  If you are in downtown Meaford next Thursday between 2 and 3:30, stop by the Big Apple on the main street next to Meaford Hall.  We will all be sitting out there with our knitting.  If that isn't enticing enough, there will probably be food.
Posted by Brendaknits at 5:44 PM

I can't think of anything that would be nicer than being there with y ou guys. HI to everybody! I know there is something being planned for it here but I am not sure what. But there will be knitting in public.

I love that Knit In Public has expanded from a Day to a Week!

I'll be thinking of you all, sitting around my favourite 'Big Apple' of all.